Sheets of metal, riddled with apertures, are scattered throughout the space, propped, hung, laid down, or freestanding. Their surfaces are punctured by iterative geometric shapes which reveal them to be the discarded scraps of industrial production, donated to the artist by a lamp factory in Lombardia, Italy. Nearby or directly beside the patterned metal, handmade tiles recreate these repetitive shapes, matching the positive and negative spaces of clay and metal.

The Merriam Webster Dictionary defines “whole” as “unhurt,” “complete,”  “entire,” and “unbroken.” It is a word as much defined by what isn’t—“unhurt,” “unbroken”—as what is, a quality that hints at the fragility of wholeness which is easily destroyed and much harder to repair. Through correspondences between positive shapes and negative voids, this collection metaphorically explores my personal search for psychological well being.

Once, as a child, I nearly suffocated inside a refrigerator. My family had just moved to a new house and, while the building was undergoing repairs and renovations, all of our possessions were stored in the basement. One day, my siblings, friends, and I decided to play hide-and-seek. When I saw the refrigerator, opened the door, and climbed in, I thought I had found the best hiding place. It only took me a few seconds to realize that I couldn’t open the door from the inside. I am not sure if it was the sudden claustrophobia of this realization or if my air supply was actually already running out, but I immediately found it difficult to breathe. I began to panic. I imagined my sisters and brother in their hiding place, calculated how long it would take for them to notice that I was still not found. I felt the time running through my fingers like sand. I need to make a sound, move the fridge, draw attention to myself. I moved about in that tiny space, trying to make it move. The door was opened—by a stranger, perhaps, a worker— and I tumbled out.

Mounted with magnets on a sheet metal surface, these works refer to the magnetized surface of a refrigerator—often used as a gathering space for family photos, notes, and toy magnets. To the right, the punched metal sheet seems to refer to a grille, a permeable barrier that suggests inside and out. The viewer is invited to interact with these movable parts, fitting them to the corresponding openings in the folded metal sheet or creating ceramic designs on the planar metal surface.

Extruded terracotta forms fit snugly into an assemblage of cut metal pipes, the phallic shapes seeming to wriggle inside their perfectly cylindrical sheaths. This piece looks back upon a time in my life when I sought affirmation in sex, in an almost literal sense filling the voids of my emotional insecurity and physical body through masculine penetration. The work also draws upon artist Audrey Wollen’s 2015 meme which, tongue in cheek, stated, “BEWARE MALE ARTISTS MAKING ARTWORK ABOUT EMPTINESS / NOTHING DOES NOT BELONG TO YOU / GIRLS OWN THE VOID / BACK OFF FUCKERS!!!!!” Wollen’s comment makes reference to the association between women and absence that goes back to Freudian psychoanalysis, in which female genitalia signal—to a young male child—the possibility of castration. In this same logic, the vagina is an absence that requires completion by the phallus. These associations pervade our society and language—for example, in almost all hardware in which corresponding parts are required to connect, the protrusion is termed “male” and the hole or mount is “female.” 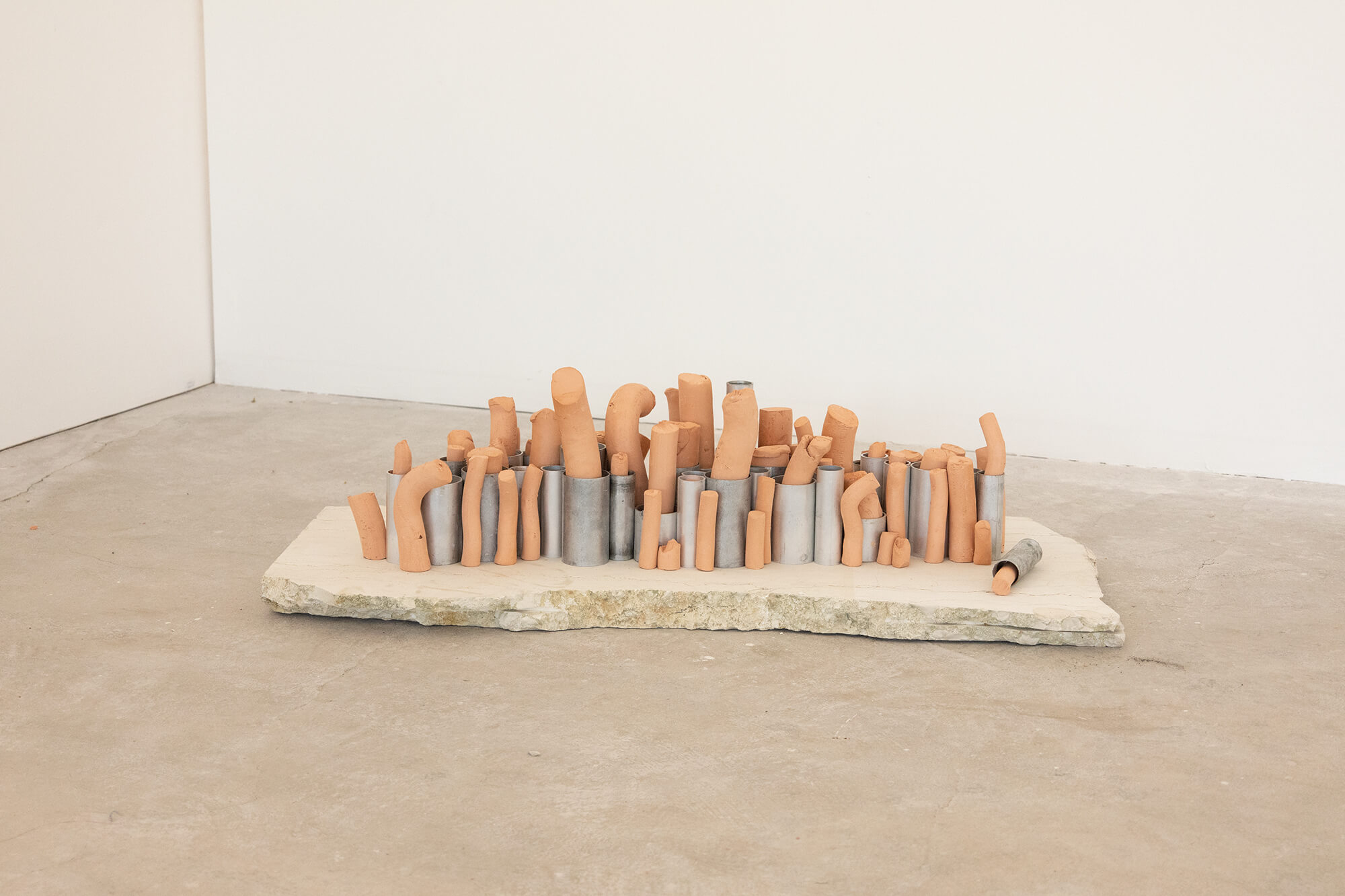 Two conical shapes are mounted to the wall at chest height, suggesting oversize breasts. For several years, I considered undergoing breast augmentation surgery, influenced by a media which rewards and broadcasts images of beautiful women with hourglass figures. Swayed by the constancy of this messaging, I thought that I lacked some essential femininity. Fundamentally, these uncertainties were about being desired by others rather than finding self-worth. This piece is constructed from clay and lighting fixtures, which were designed to withstand fresh and saltwater. Their absurd shape and size critique cultural expectations of the female body, while also suggesting an armored breastplate, as though fending off further attack.

A brass sheet full of circular openings falls in front of a steel metal surface like a veil. On the steel facade, blue porcelain dots silhouette the familiar form of the Virgin Mary. In my composition, the Virgin appears as an absence that implies self-abnegation and sacrifice, reflecting in part on the expectation instilled by Catholic belief that mothers martyr themselves for their children. While I grew up with religion, attending Catholic church with my family and going to summer camps run by nuns and priests, I ultimately realized that it had become a consolation and crutch that prevented me from seeking personal fulfillment. In my adult life, it caused me to glorify my pain rather than seek happiness.

This collection also contains a performance of myself under a sheet of brass with blue handmade porcelain disks surrounding my body, like the veil of Virgin Mary.

Laid flat upon the steel sheet metal, row upon row of black clay lozenges function like tick marks, counting off the innumerable days—months, years—that I took antidepressants. As with religion, I now see that medicating my unhappiness was not a long-term solution but a temporary fix, but a band-aid attempting to seal an open wound. I was first prescribed the pills after a bad break-up and, at the time, hesitated over my doctor’s recommendation. While antidepressants can be very helpful to some, I should have listened to my own intuition, rather than trusting my physician’s word. Reflecting upon the writing of Mark Fisher has been helpful in understanding how my own struggle with medication is also linked to the faulty structures that define institutions, governments, and corporations in the context of late capitalism. As he writes in his 2009 text Capitalist Realism,  “We must convert widespread mental health problems from medicalized conditions into effective antagonisms. Affective disorders are forms of captured discontent; this disaffection can and must be channeled outwards, directed towards its real cause, Capital.”

Growing from the dirt-speckled roots of a tree, a metal tube spouts an outstretched tongue, which seems to writhe and flail in the search for sound. Drawing upon the childhood years that I spent electively mute, this work evokes the suffocating sensation of being silenced. I spent years believing that I couldn’t communicate when, in fact, I was never allowed or invited to speak. I lived with an anxiety that seemed to grip my stomach and organs and which traveled throughout my body in the ensuing years, sending tendrils into my lungs, climbing from parasite-like from gullet to throat.

Mark Fisher, a British theorist and author of Capitalist Realism 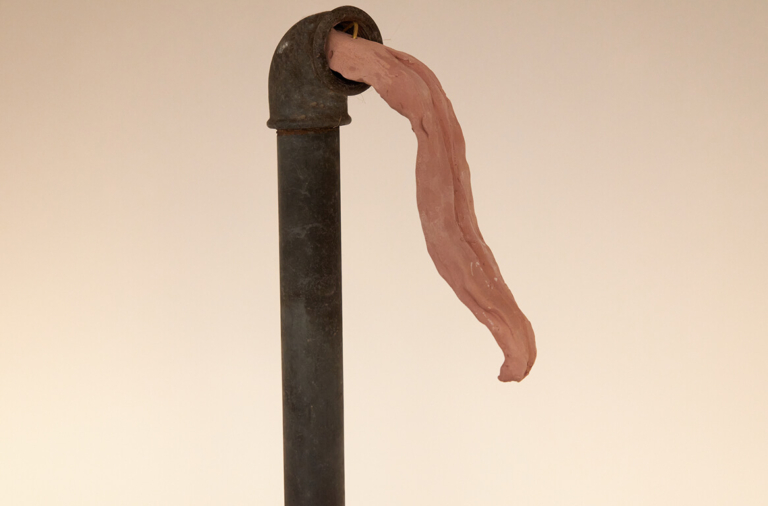 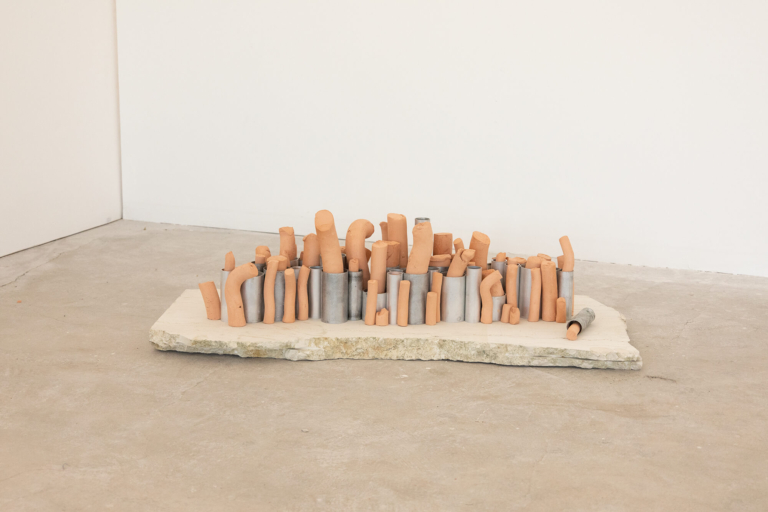