Coronavirus has caused fear and loss. But it has also prompted us to reflect upon the importance of human life, cultural connection, and collective memory. This moment, which mirrors those that have come before, offers an opportunity for a contemporary form of humanism and social rebirth.

When the COVID-19 pandemic began in 2020, I began to research prior plagues and how they affected my new home in Veneto, Italy. One of the most devastating historical epidemics was the Black Death, which originated in China in 1334 and arrived in Europe via the Silk Road in 1347. Between 1334 and 1400, bubonic, pneumonic, and septicemic plagues—all caused by Yersinia pestis bacteria—swept Asia, Europe, and Russia, killing an estimated 100 million people. Localized plagues would continue across Europe until the 19th century.

The importance of Venice as a center for trade and the primary point of connection between the Middle East and Europe—with the associated and unceasing influx of people and wares—made it particularly vulnerable to these diseases. In 1423, the Venetian island of Lazzaretto Vecchio was set aside for the isolation and treatment of the plague-stricken. In 1468, the Venetian government appointed Lazzaretto Nuovo as a port for quarantine—so called for the 40 day, “quaranta giorni,” layover. The plague prompted the government to create a much more robust public health system, administered by a team of hundreds of city officials; previously, care for the sick was primarily the responsibility of religious orders. Following the arrival of the Black Death, specialized plague doctors tended to the sick at designated isolation sites. While these measures did not entirely prevent any occurrences of the Black Death in the city—especially given that scholastic medicine of the time offered no real understanding of contagious diseases—historians believe that the measures limited the scope of these outbreaks.

Even more importantly, these institutions paved the way for the transformation of thinking across science and arts that occurred during the Renaissance. “What happens after the Black Death, it’s like a wind—fresh air coming in, the fresh air of common sense,” says medical historian Gianna Pomota. “On the one hand, the plague works as a kind of acid. On the other hand, people try to re-create ties—and, perhaps, better ties.” The dramatically diminished labor force of post-plague Europe permitted a new social mobility and greater power to the artisan class. These economic shifts gave rise to humanism—a stance that prioritizes individuals and the agency of human beings above the power of god. The philosophy and arts of this time was also fueled in part by a rediscovery of Classical literature, sculpture, and architecture, fueling new and recombinant forms that united antique aesthetics with contemporaneous ideals.

I began this collection in March 2020, when Coronavirus arrived in Italy and my mind kept conflating the past and the present. The Renaissance was born out of a nonlinear vision of time, the knowledge of the ancients entering the consciousness of 16th century Italians. I felt that, perhaps, the same thing might happen again centuries later.

Reflecting upon the prevalence of masks during the COVID-19 pandemic, I began to make ceramic versions of the plague doctor mask first developed by physician Charles de Lorme in the 17th century. De Lorme’s design included a bird-like mask and a wide-brimmed hat. At the time, it was thought that plague traveled by way of “miasma” (bad air), which disrupted the balance of bodily fluids. The mask’s long, beak-like nose was stuffed with theriac—an herbal compound—which it was believed would prevent such an infection. Though created long after the original epidemic, this costume has defined the collective imaginary of the Black Death. In a time when diagnosis with plague was concomitant with a death sentence, this grim-looking mask came to symbolize a harbinger of (rather than a savior from) death. I was struck by this proto-form of mask which so strikingly mirrored one of the central experiences of the contemporary COVID pandemic. For many, the surgical mask has become an icon of social distance and the sense of alienation felt even during in-person gatherings from not being able to see an interlocutor’s face during conversation. One of the Latin words for “mask” is “persona.” Swiss psychiatrist Carl Jung defined the persona as the version of ourselves that we present to the world, our masked selves. The term itself suggests a dialectic between concealed and true selves, facade and identity. During the pandemic, I found myself questioning this interpretation of the mask as a sign of our isolation, a barrier placed between individual and the world. Rather, being masked caused me to turn to other modes of connection, communicating with others through eye contact, “windows to the soul” as they are called. It seemed to me that, as Pomota suggested, this was an opportunity to forge better bonds.

This collection of works is intended to realize the confusion of time periods that contributed to the Renaissance. However, rather than harkening back to antiquity, I am looking to symbols from the transition from medieval to modern times. I take murano glass—one of the products that Venice continued to manufacture and export throughout the medieval epidemic—as an emblem of continued trade and international relations in a time of crisis. In the sculptural works, mask-shaped vessels hold candles that are scented with herbs used in the “purification” of plague doctor masks. As the candle melts, the mask weeps waxen tears. In photographs, chunks of un-molded glass cast shadows that also evoke the masks’ hooked noses. Ceramic masks following de Lorme’s design—though very different from those that we wear today—link our present with that history and offer a silver lining to the devastating amount of loss sustained by peoples around the world, a hope for new institutions (perhaps even more common and widespread mask-wearing) that will bring about a better future. 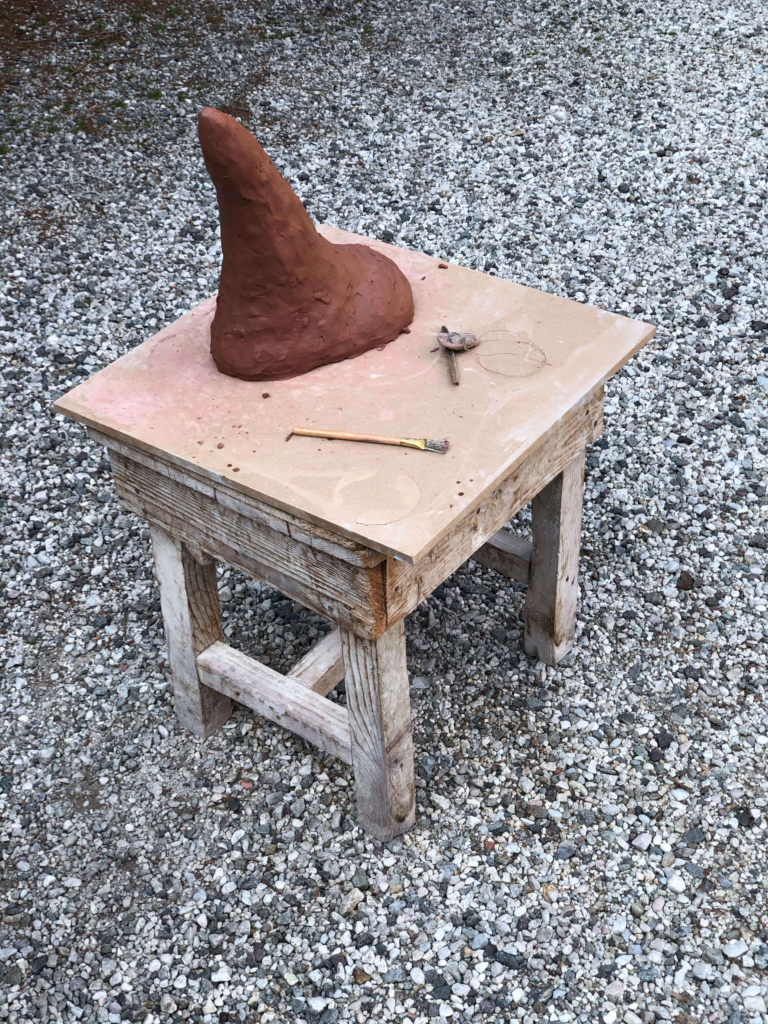