Copper Nail and the Little Bird

Hammer a copper nail into a sapling, and the tree will die. It takes more nails to fell an older tree, to infiltrate the growth cells and interrupt the photosynthetic process with oxidized copper toxins—but it can be done. When the tree dies, a vibrant ecosystem of insects and birds must seek a new home.*

Copper was one of the earliest metals known to man, first coming into use between 8,000 and 10,000 B.C.E. as a substitute for stone in the production of ornaments, weapons, and tools. The discovery that it could be alloyed with tin to produce bronze spurred an age of expanded trade and cultural development across Europe and Asia Minor that lasted from 3300 to 1200 B.C.E. The metal’s current name was given by the Romans, who called it “aes Cyprium,” Latin for “Cypriate copper”—where the Romans primarily mined the metal—and latter abbreviated to “cuprum.” Its material value to the Romans and the cultures that would follow is evident in the fact that few Roman bronze sculptures or architectural constructions survive, most melted down and recycled for use in warfare and industry. The dome of the Roman Pantheon, for example, was originally covered by copper and bronze plates that were respectively stolen and repurposed by Constans II in A.D. 663 and by Pope Urban VIII in the 17th century. Today, copper is still used widely in construction, electronics, and transportation, valued for its malleability, durability, and conductivity. And it is still wielded, on occasion, in the killing of trees.

This body of work looks at humankind’s relationship to nature through the lens of copper, weaving a web of material confusions that demonstrate our growing alienation from the earth. A coppery tree, composed of rusted-out disc rotors mounted on a steel pipe, seems to grow from a square of sheet metal. Beside it, twisted rods and angles spring from stone like an angular bush. On another plane of metal, piled upon a slab of asphalt (almost mistakable for a third type of rock), two desert stones are levered at an infinitesimal angle by a copper nail, which splits them as though puncturing the wood of a petrified stump. One stone is from Saudi Arabia, the world’s largest exporter of crude oil, and the other from Arizona, which holds one of the major copper deposits in the United States. Behind these assemblages, an engulfing painting recedes illusionistically into iterative coffers—an image of Harry Weese’s plan for the ceiling of the Washington, D.C. Metro system, which was itself adapted from the ceiling of the Pantheon. Stone, metal, and paint come together in an illusion of nature that is too geometric, too well designed.

Several of these materials refer to forms of infrastructure that, while fueling trade and cultural exchange from the Bronze Age to the present, have contributed to the destruction of the environment. Copper is one of the primary materials that enables the United States’s love affair with the automobile industry.

Running on Saudi oil and assembled from copper tubing and parts, cars travel the landscape on rivers of asphalt. However, copper’s use in computing and electronics also beckons a possible future, in which electric cars replace oil motors. At the installation’s periphery, chunks of asphalt are suspended by metal wire like the weighty pendulums of unseen clocks, suggesting alternatives of adaptation or annihilation and the necessity of addressing the climate crisis.

Note: The image of the bird losing its home holds a particular poignance for me. Though there are many possible origins of the name “Jenna,” the one that most resonated is the Arabic word for “little bird.” 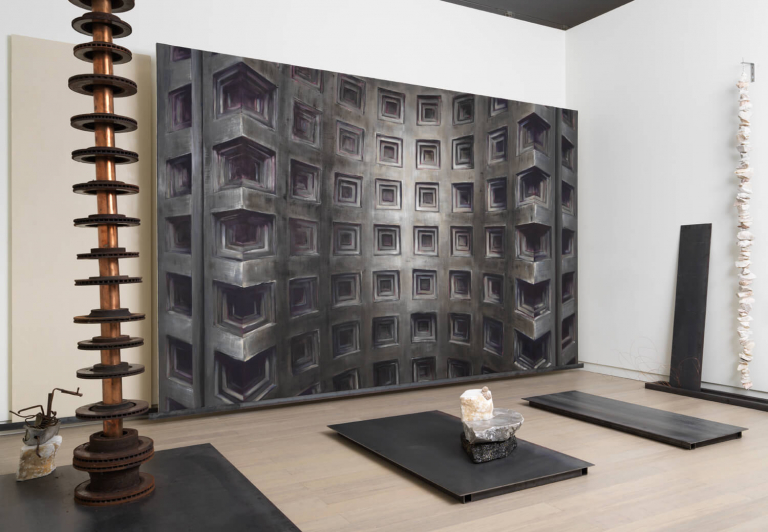 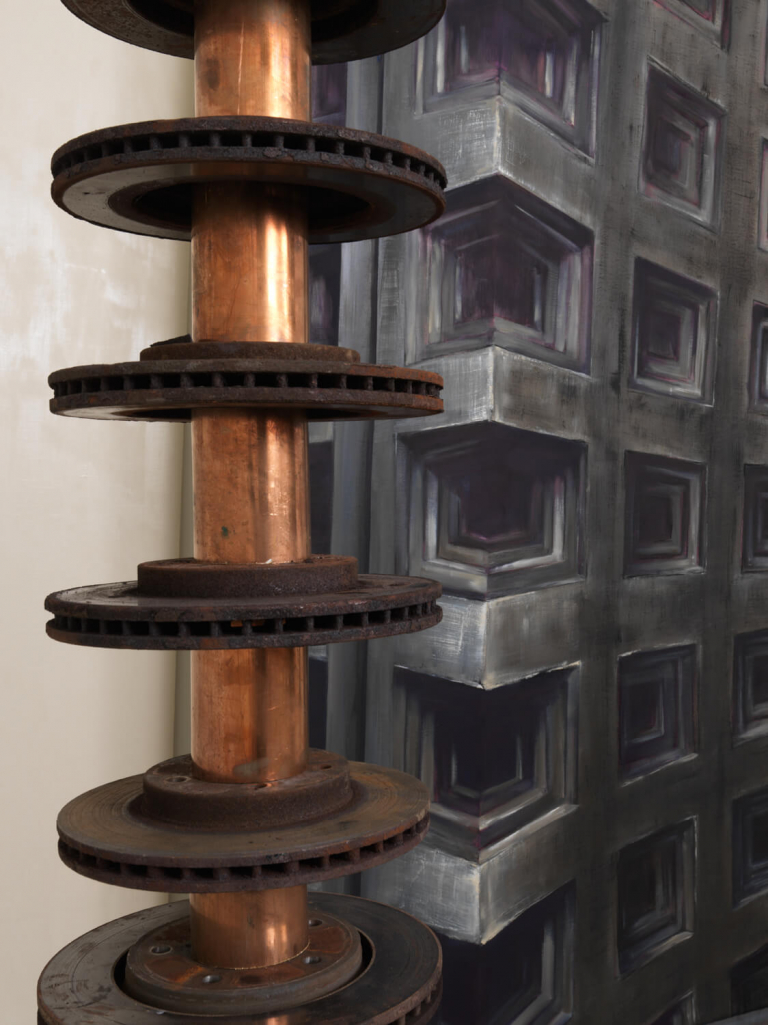 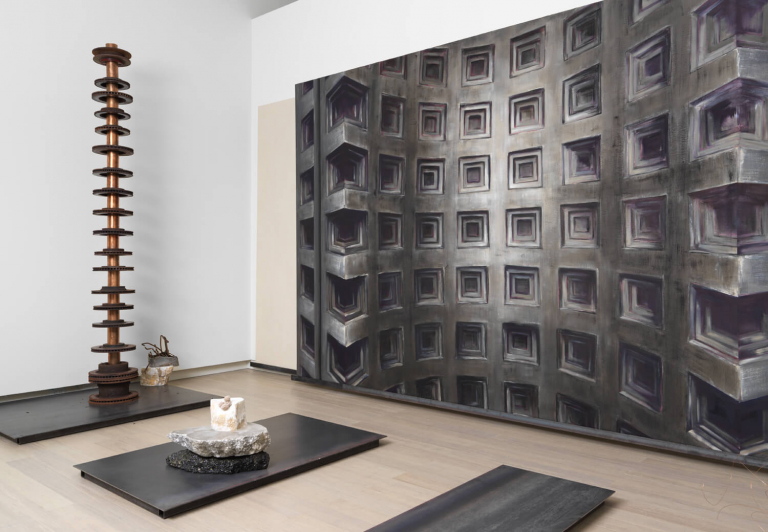 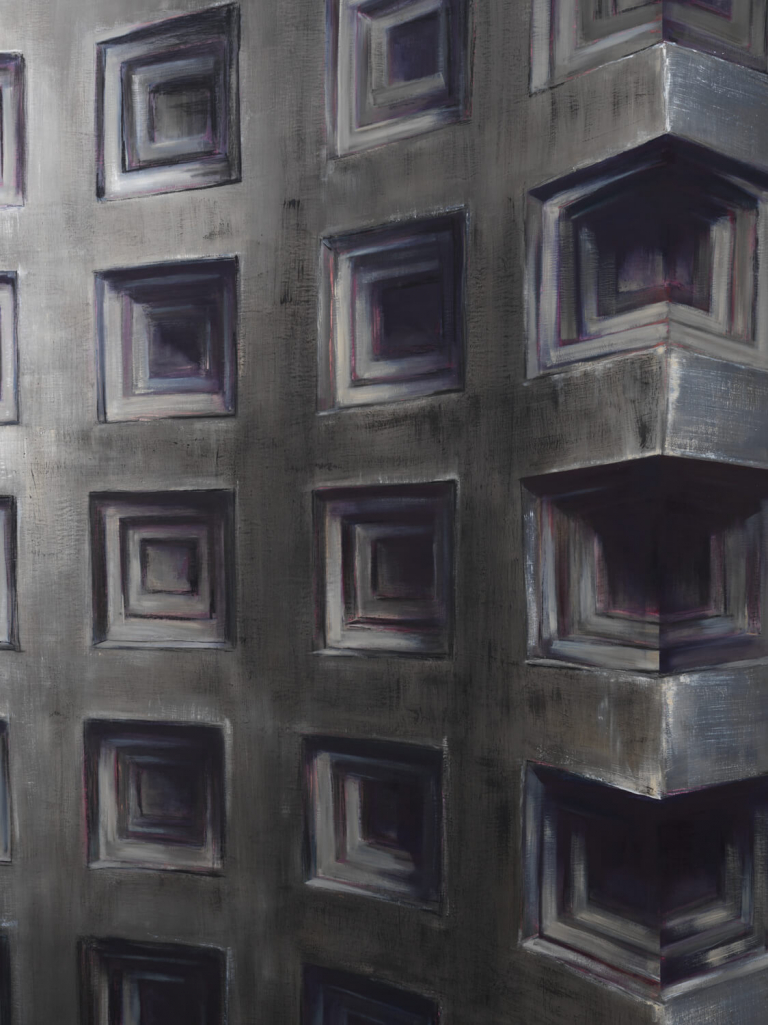 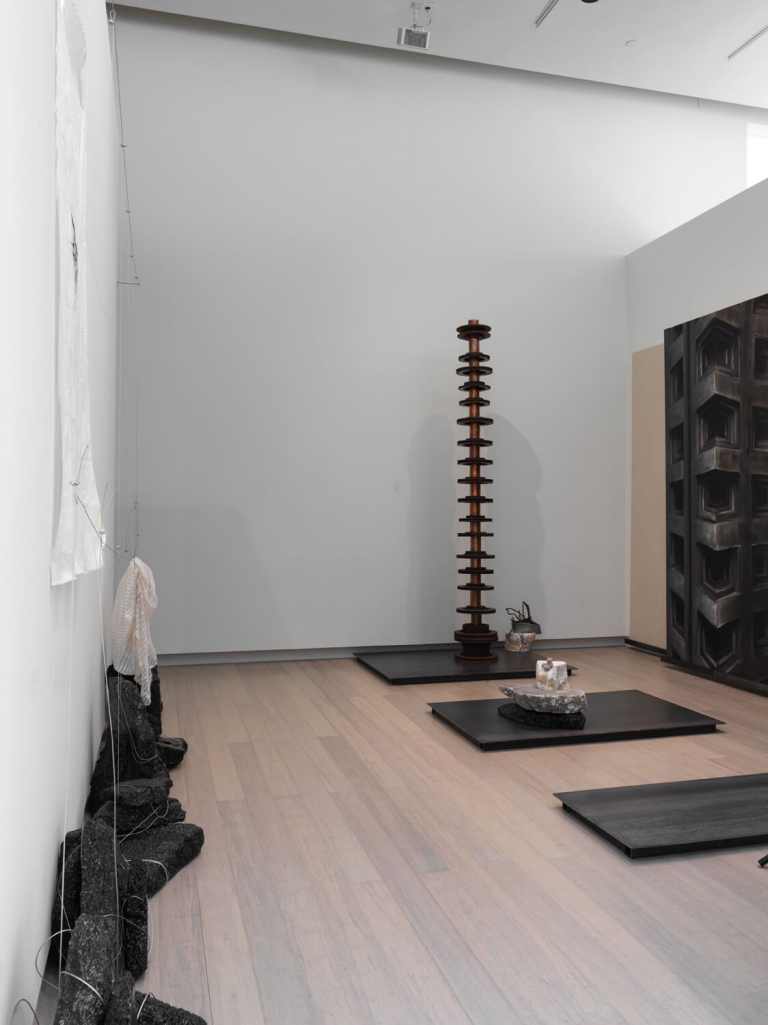 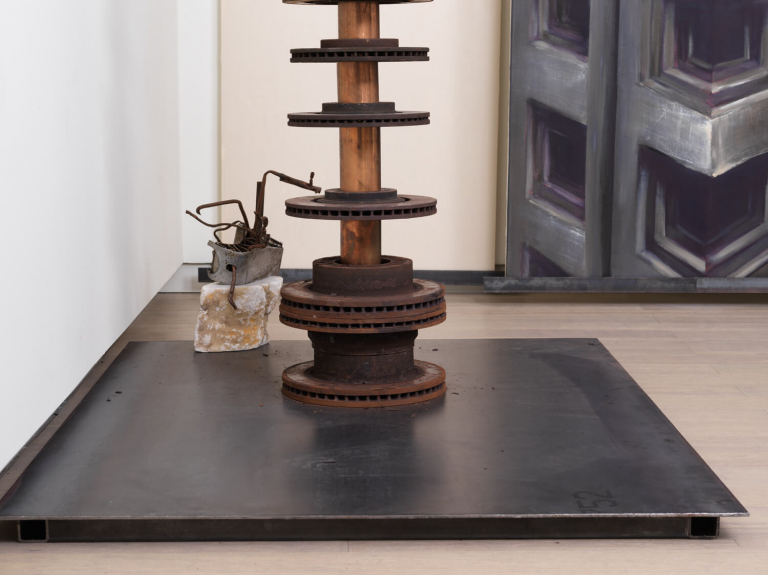 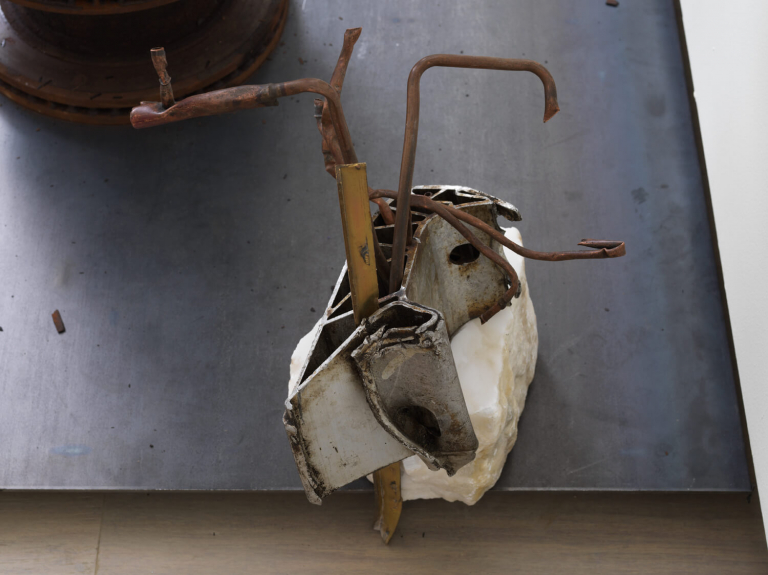 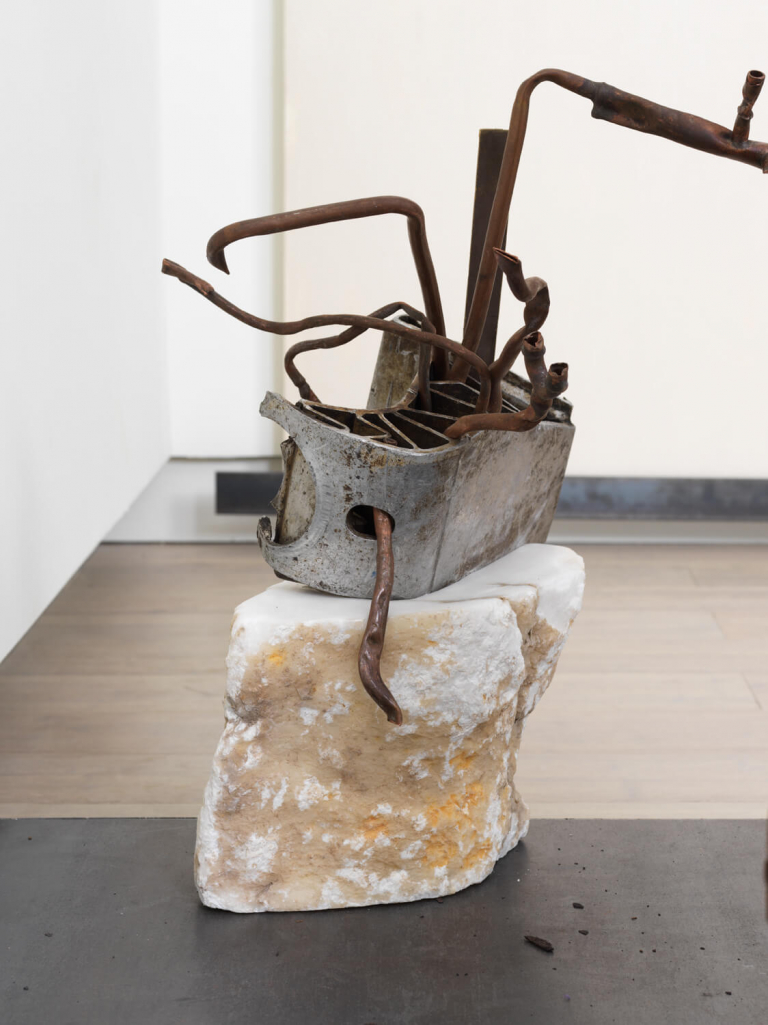 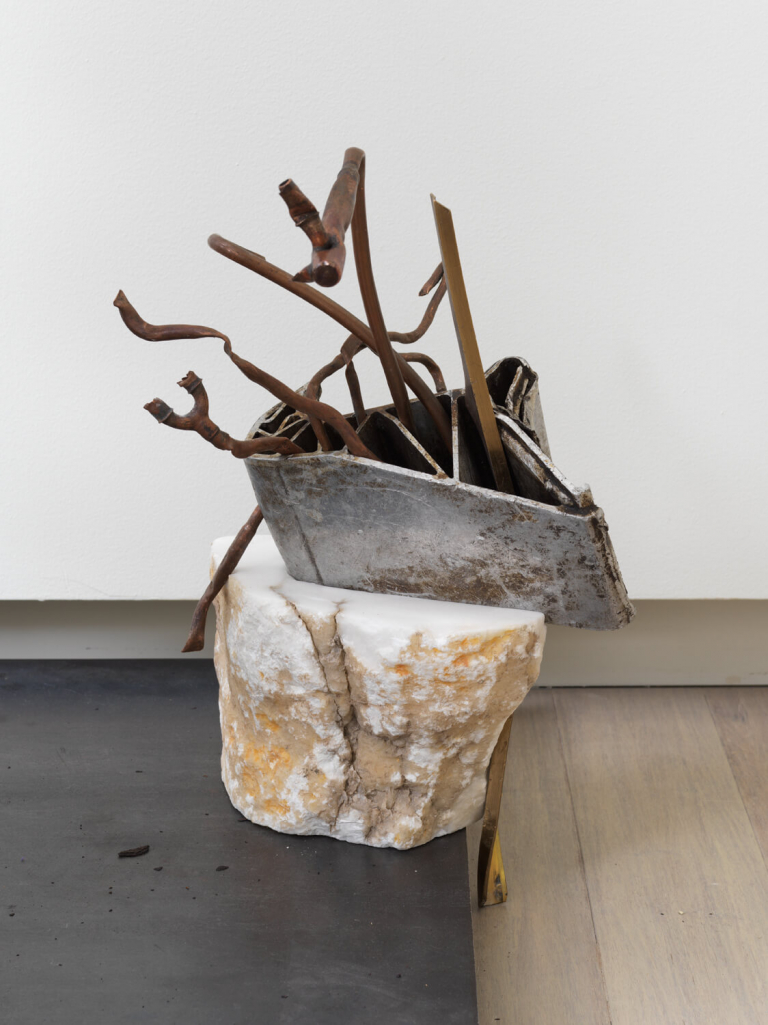 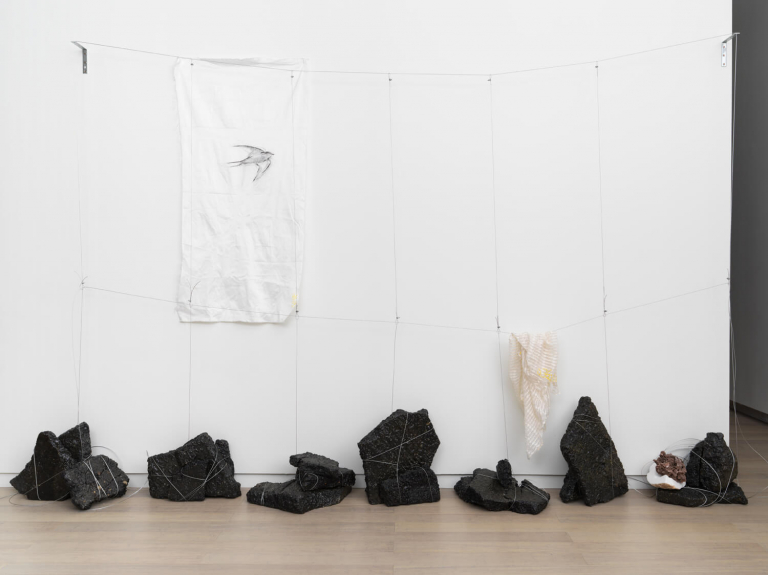 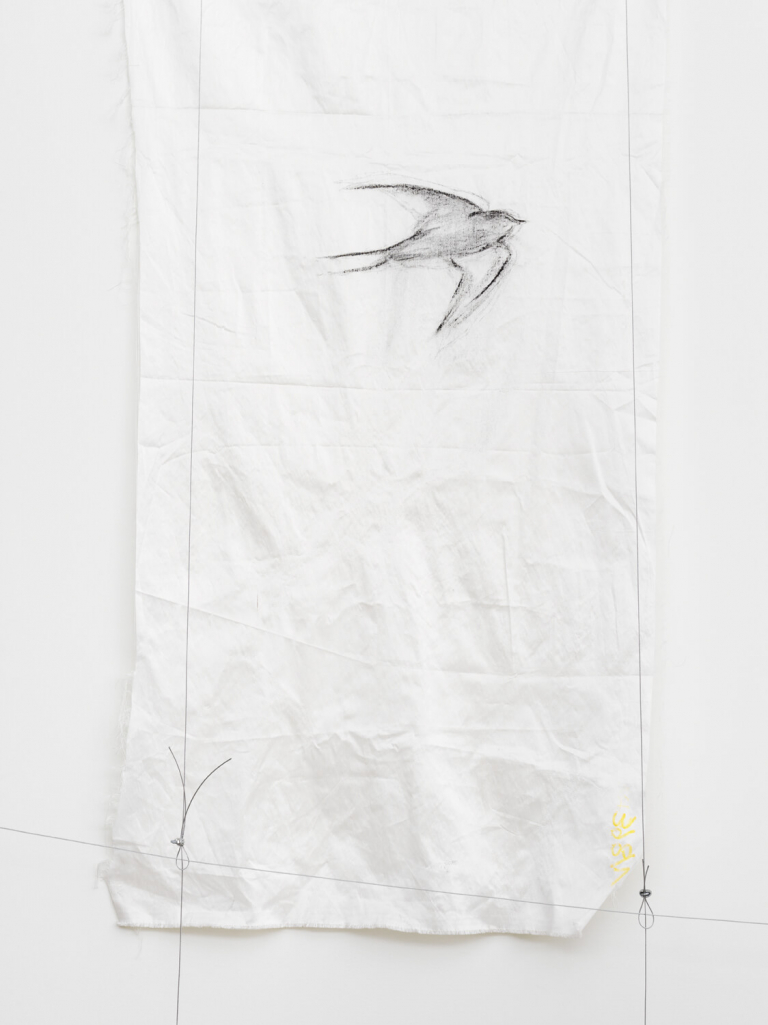 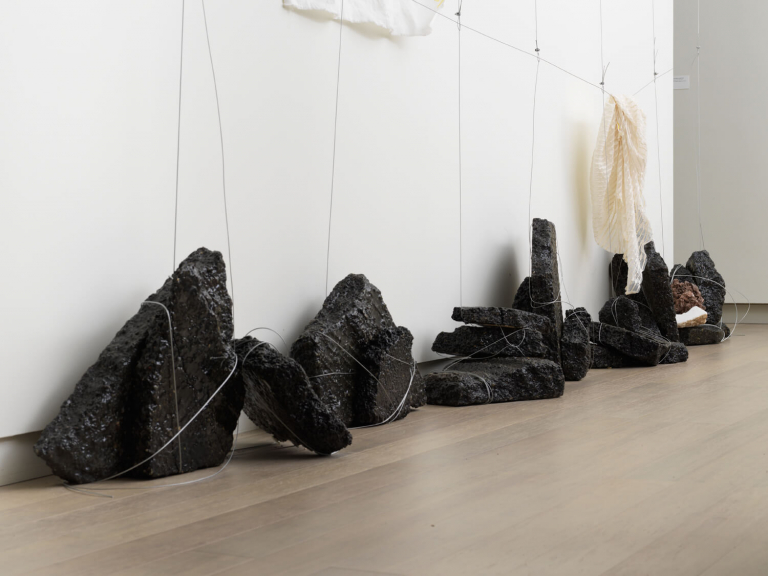 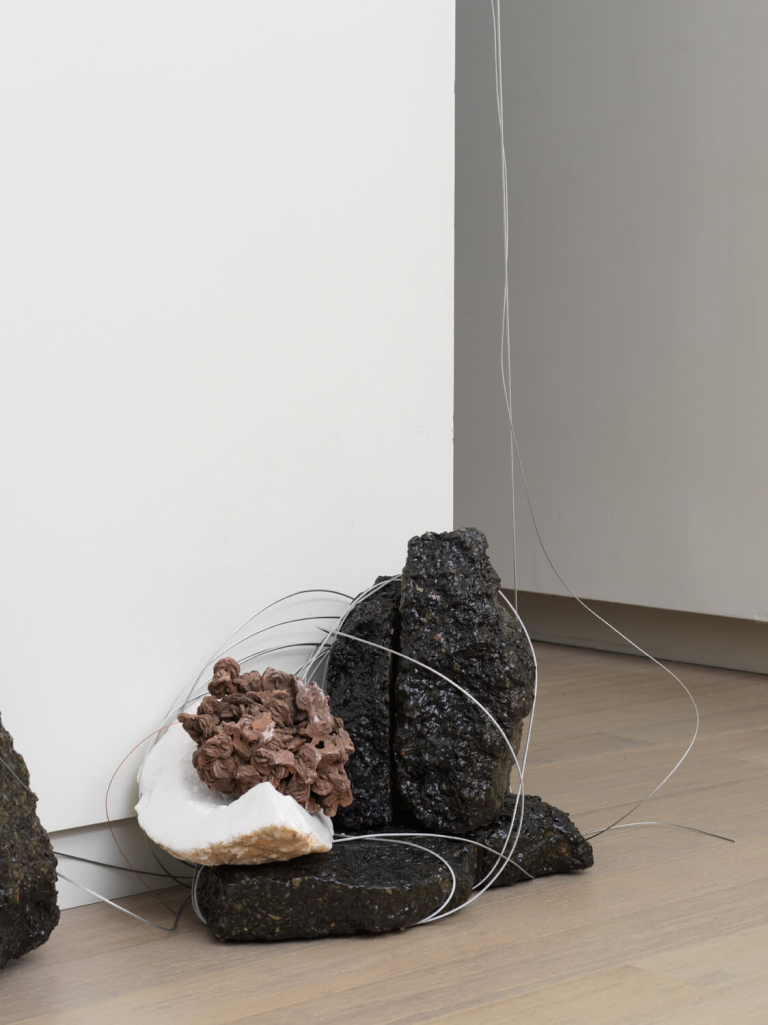 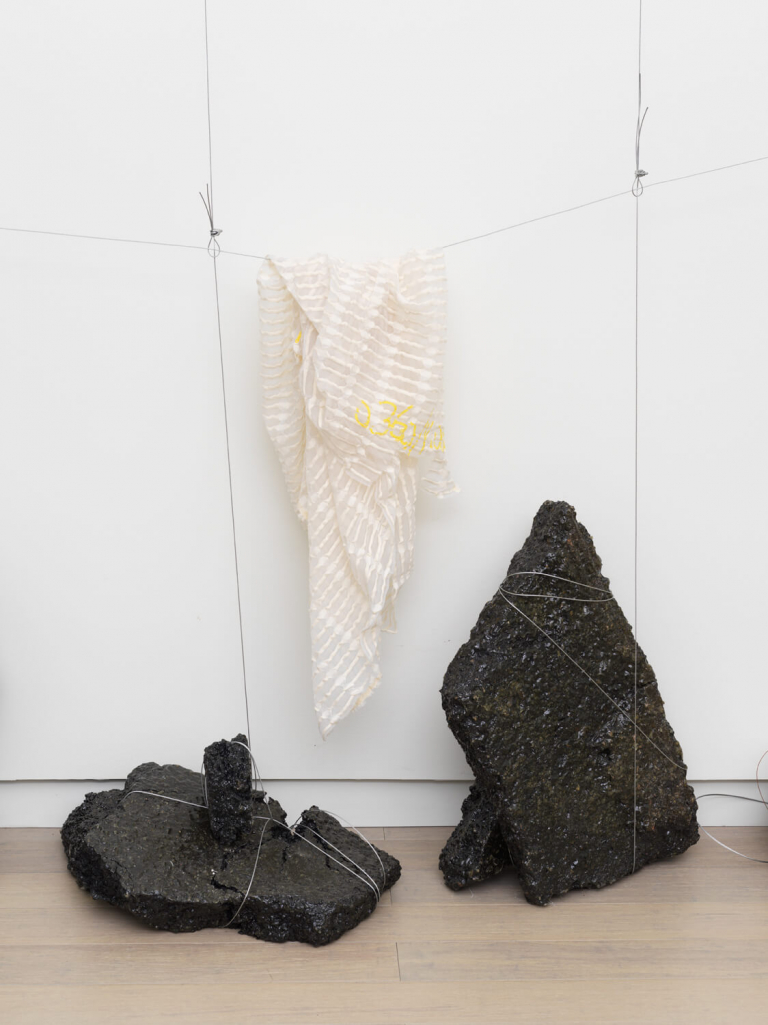 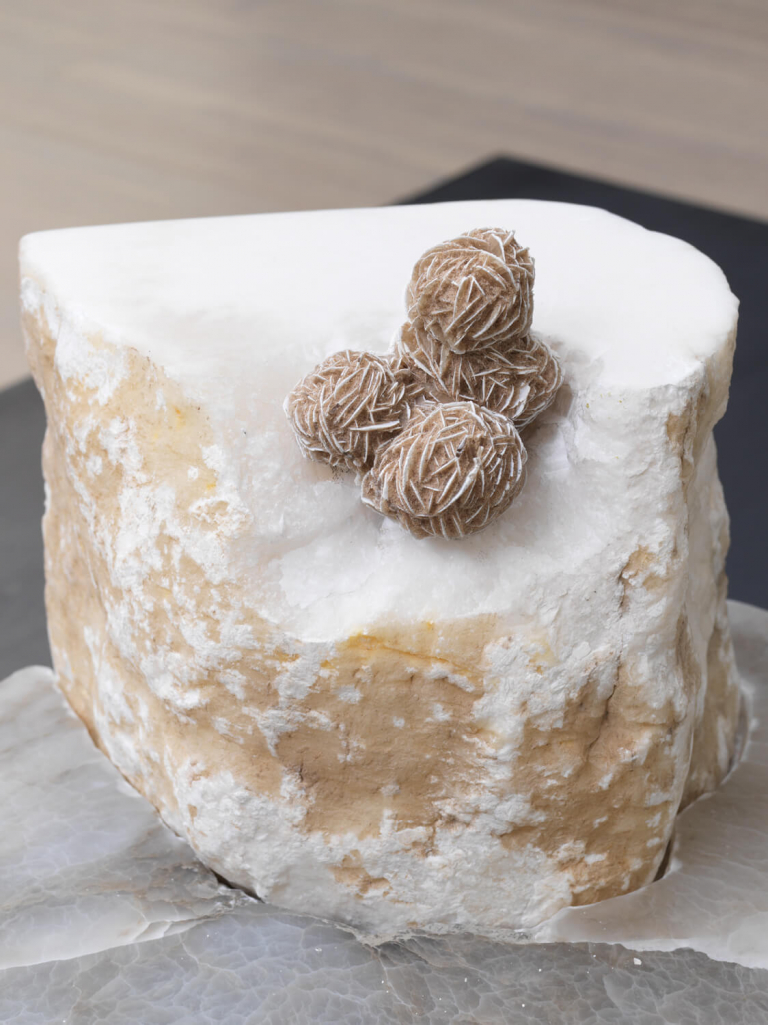 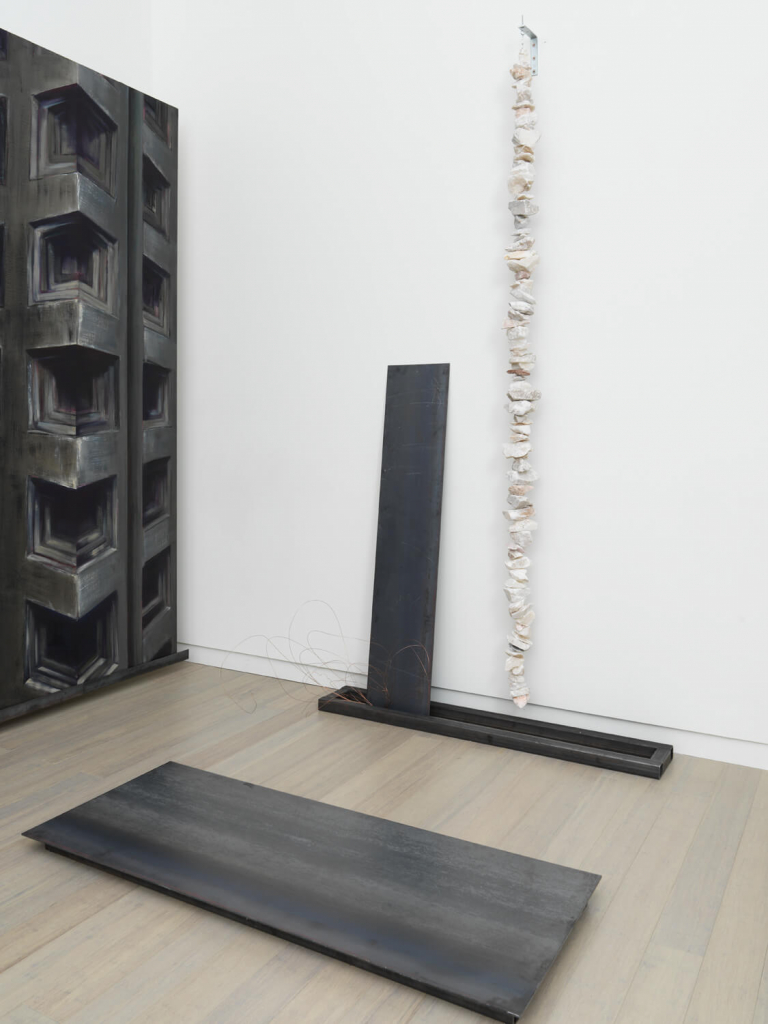 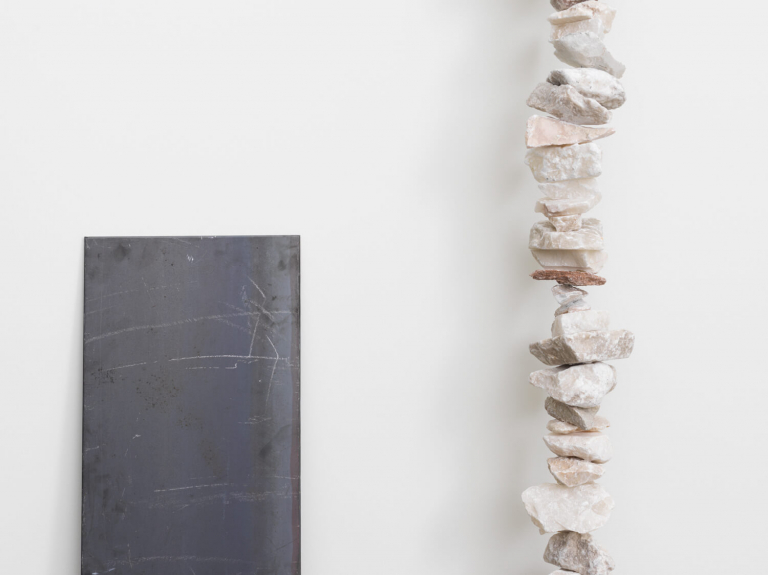 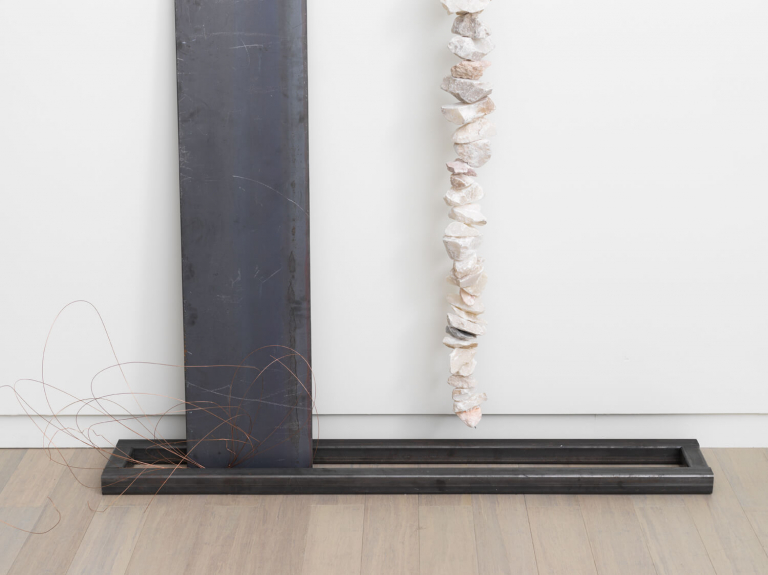 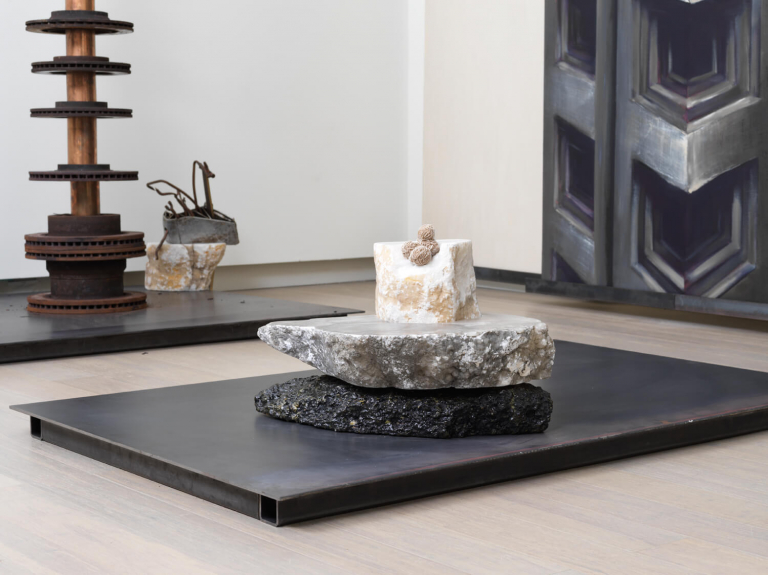 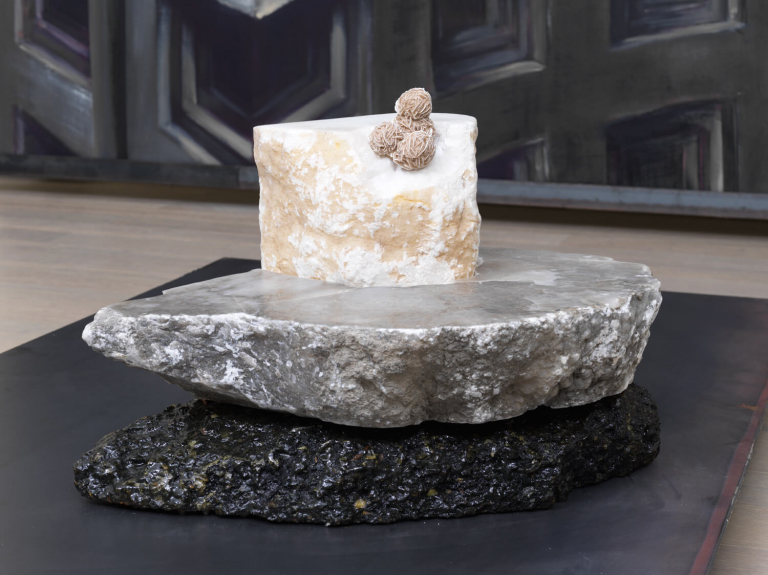 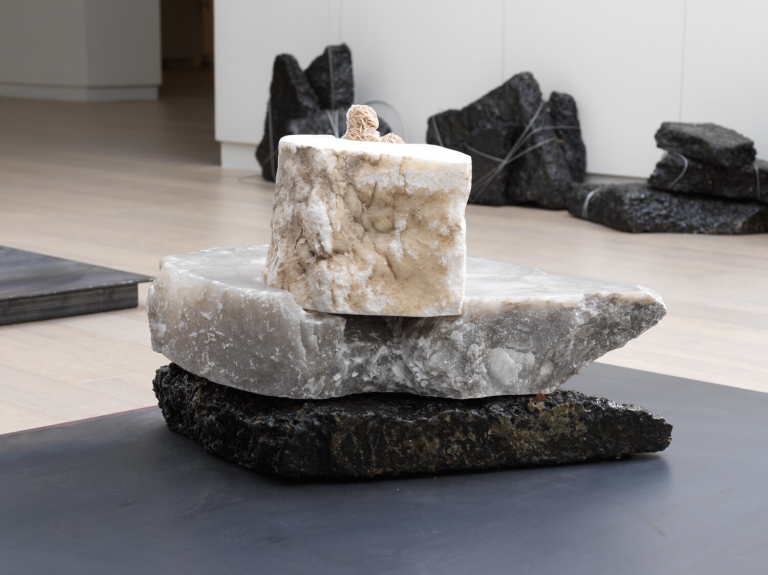 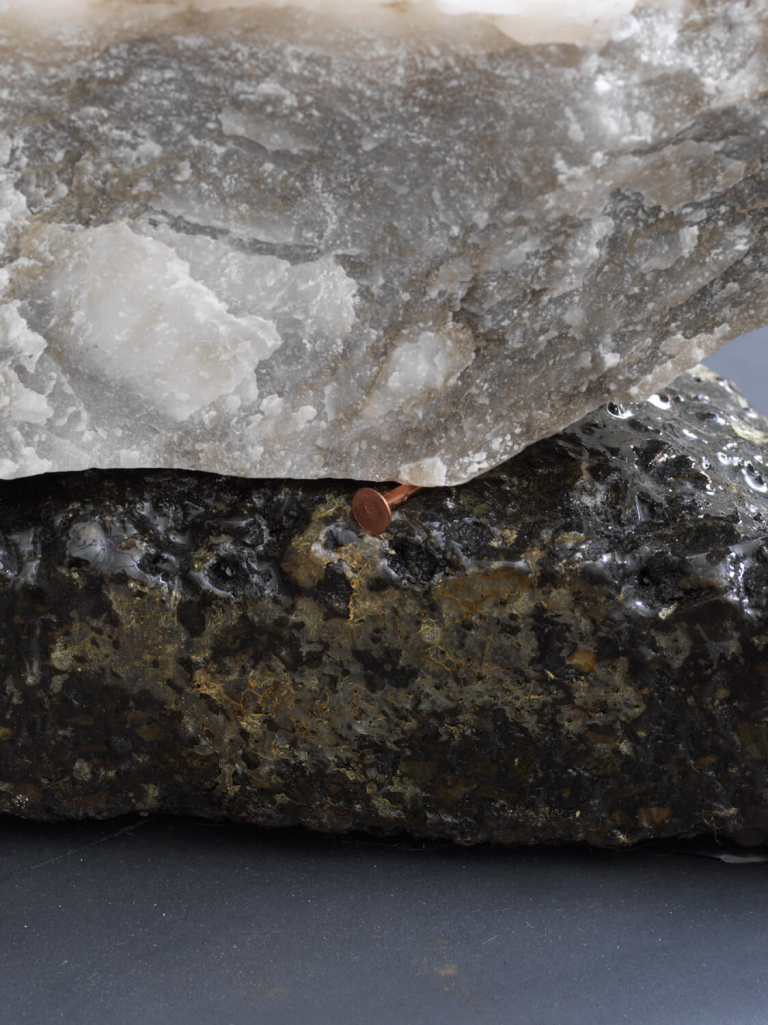 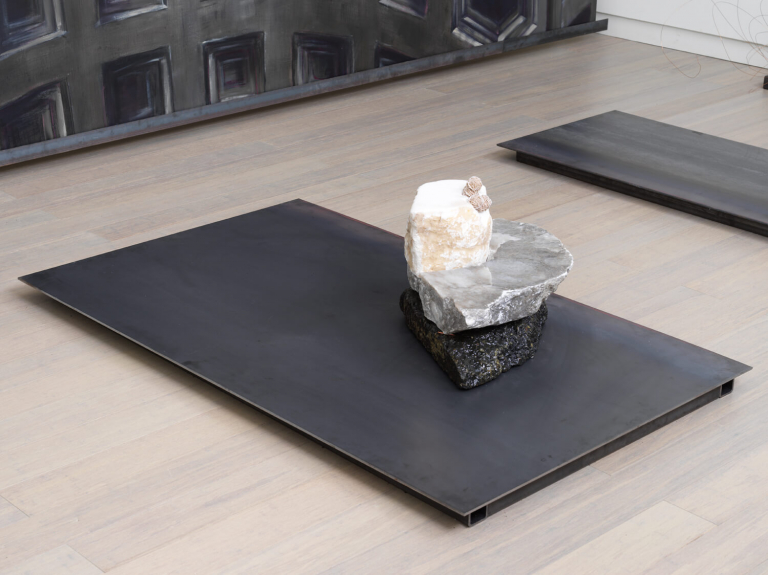