Blood Feather of a Northern Flicker

Blood Feather of a Northern Flicker is based on my struggle with metal intoxication and my efforts to rebuild the ruin that I had become.

In the fall of 2016, my body began to fall apart. I was suffering from heavy metal toxicity, adrenal fatigue, burnout, respiratory problems, muscle weakness, and brain fog. I felt as though I couldn’t move, my legs weighing me down like twisted steel. Even reading was an effort—I would scan the same paragraph over and again without once being able to turn the lines on the page into meaning or sound. Slowly, I tried to cleanse my body with different regimens, all while drinking water solely from glass bottles to avoid all risk of contaminants.

On my way to the studio one morning, I found a northern flicker that couldn’t fly and could barely walk. I took the bird to a nearby animal hospital, where she died a few days later. I felt that the bird was me, mirroring my own body’s sharp decline. Later, I found myself looking at the feather she left in the box that I used to transport her. Nestled amongst the barbs, the shaft of the feather was filled with blood, still in the process of growing when it fell out prematurely. Over the course of my own recovery, I thought often of the northern flicker, which became—in my mind—a symbol for my own unruly body.

For the five years before my symptoms began, I had lived in a Brooklyn loft—slightly sketchy, not up to code, definitely illegal. Though I have never been able to confirm it, I have wondered whether the pipes in that building were what prompted my own physical decline. Often invisible behind the walls of a building, water pipes and electricity cables are like the lifeblood of a building. When the body of my home became contaminated, so too did I.

Extending the metaphor that links my physical self to the structures that hold me, this collection is assembled from architectural fragments, including corroded water pipes, alabaster remnants, and the twisted remains of structural I-beams. I bound these ruined materials together with wire or roller-chain, a material which—like my body—bent one direction, flows beautifully, and the other, torques and can be put under severe duress. 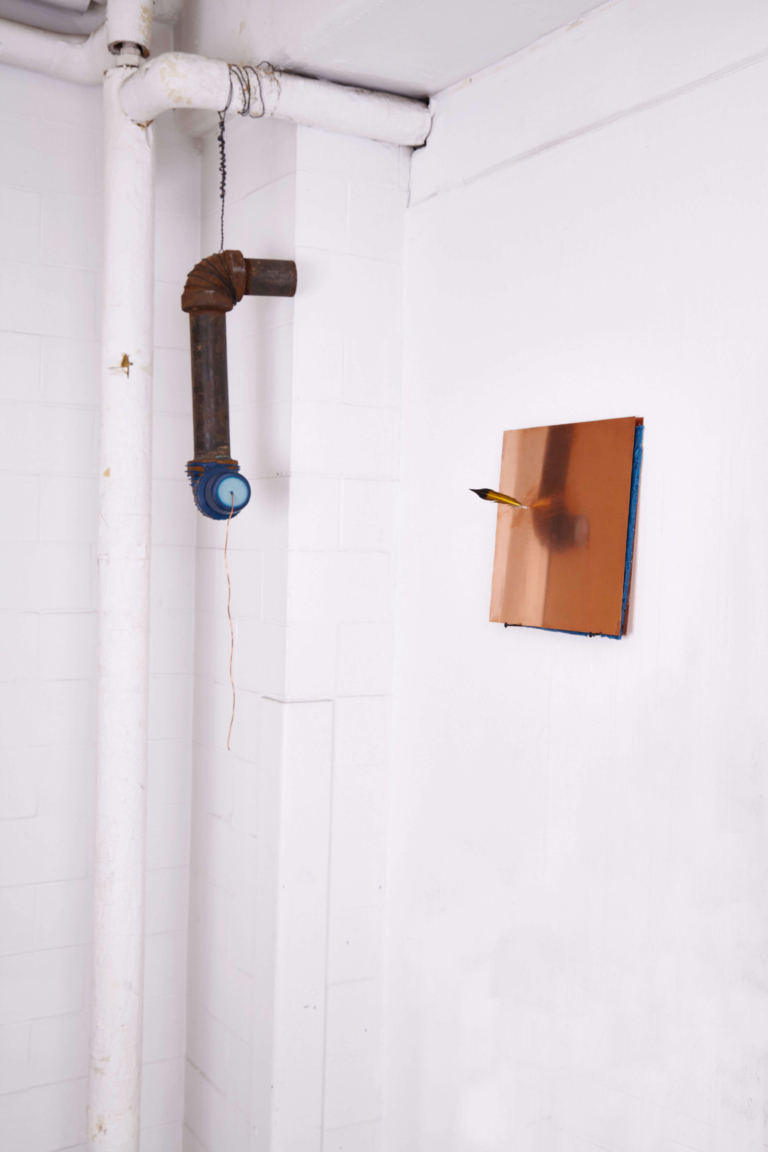 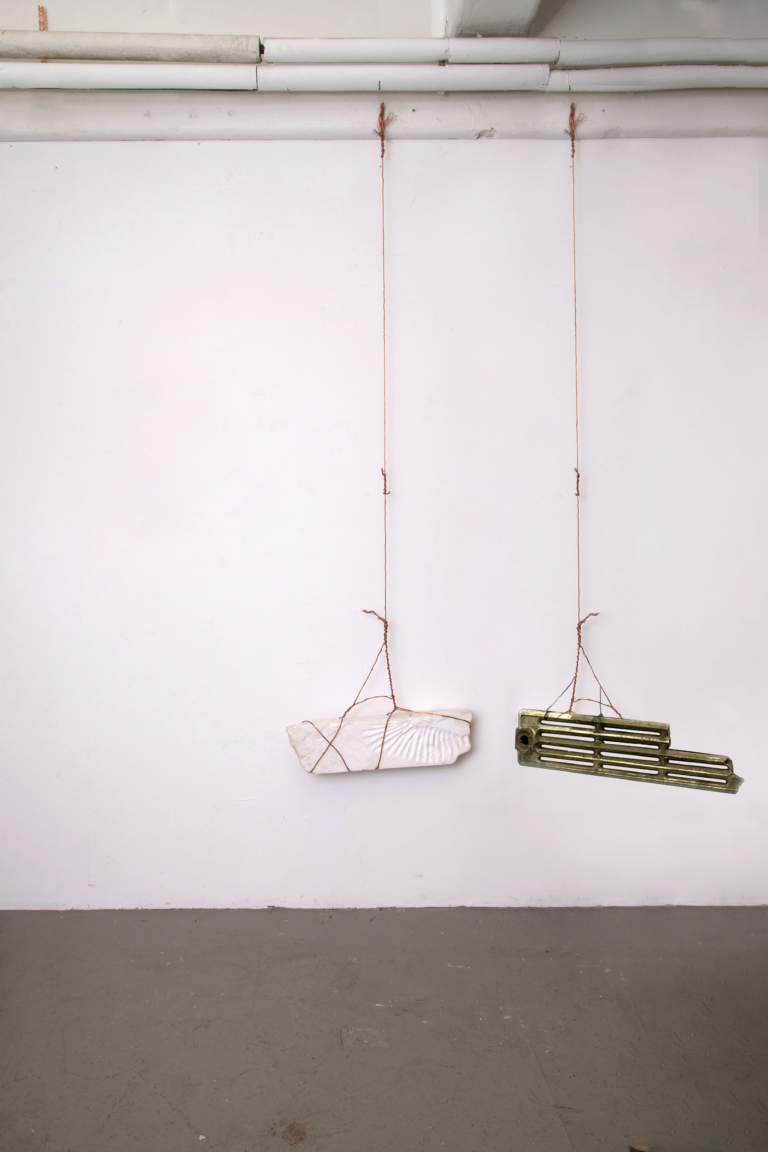 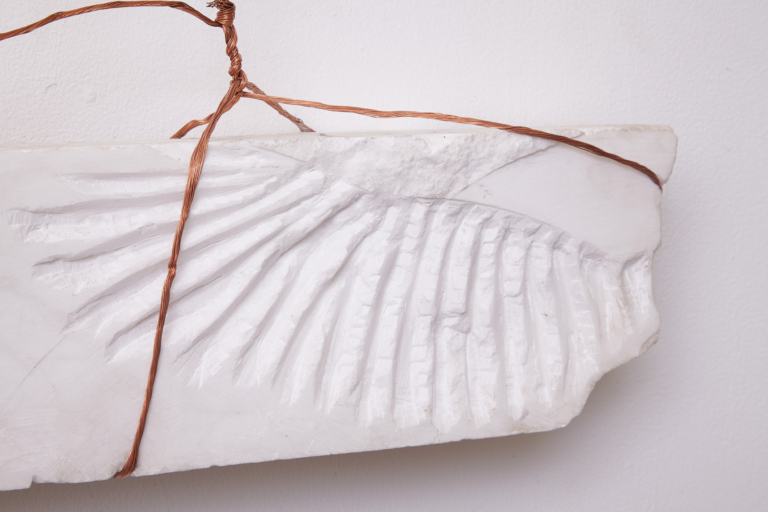 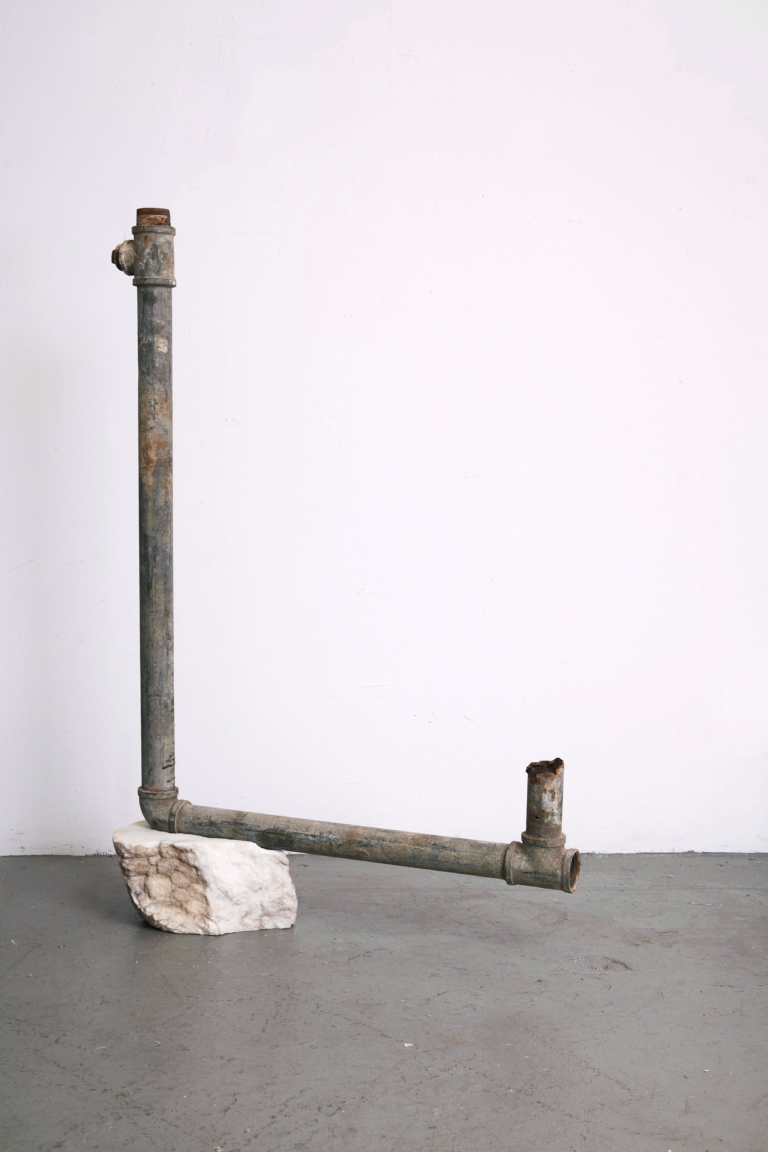 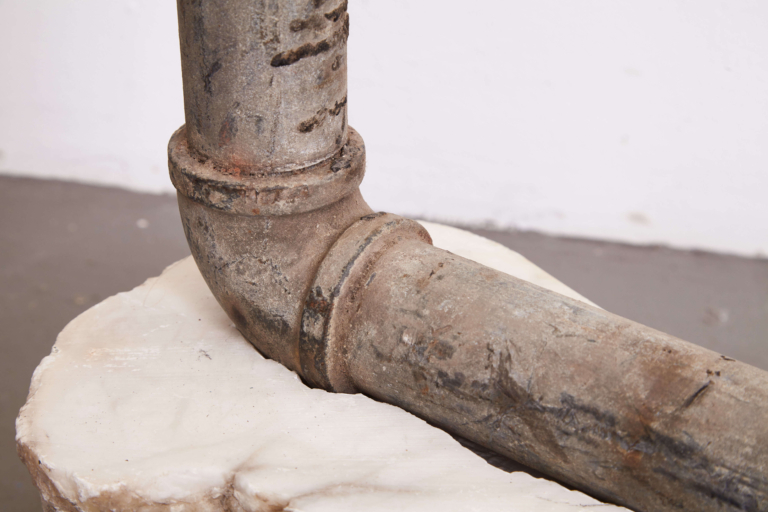 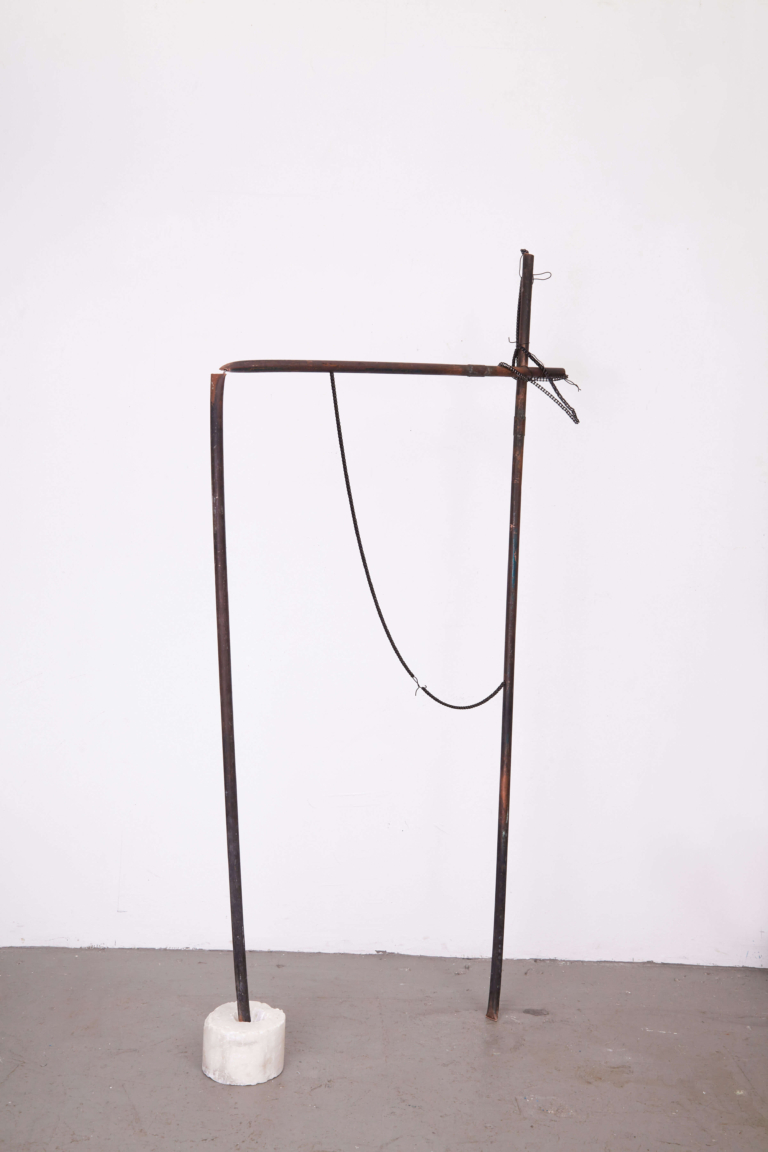 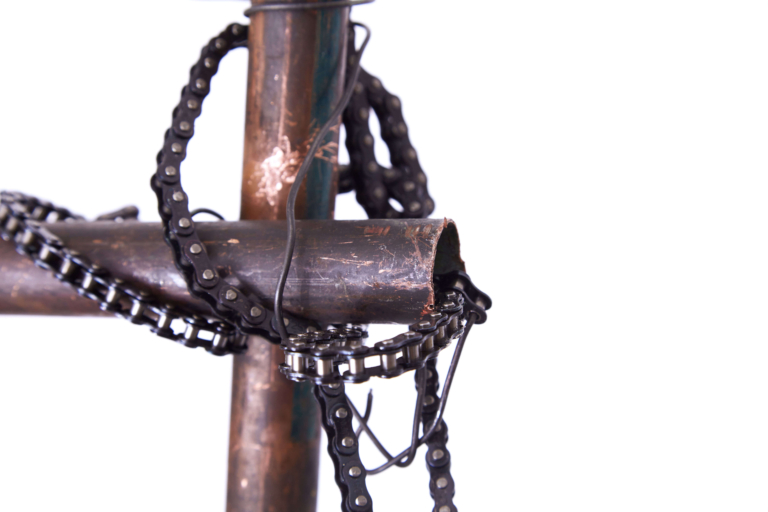 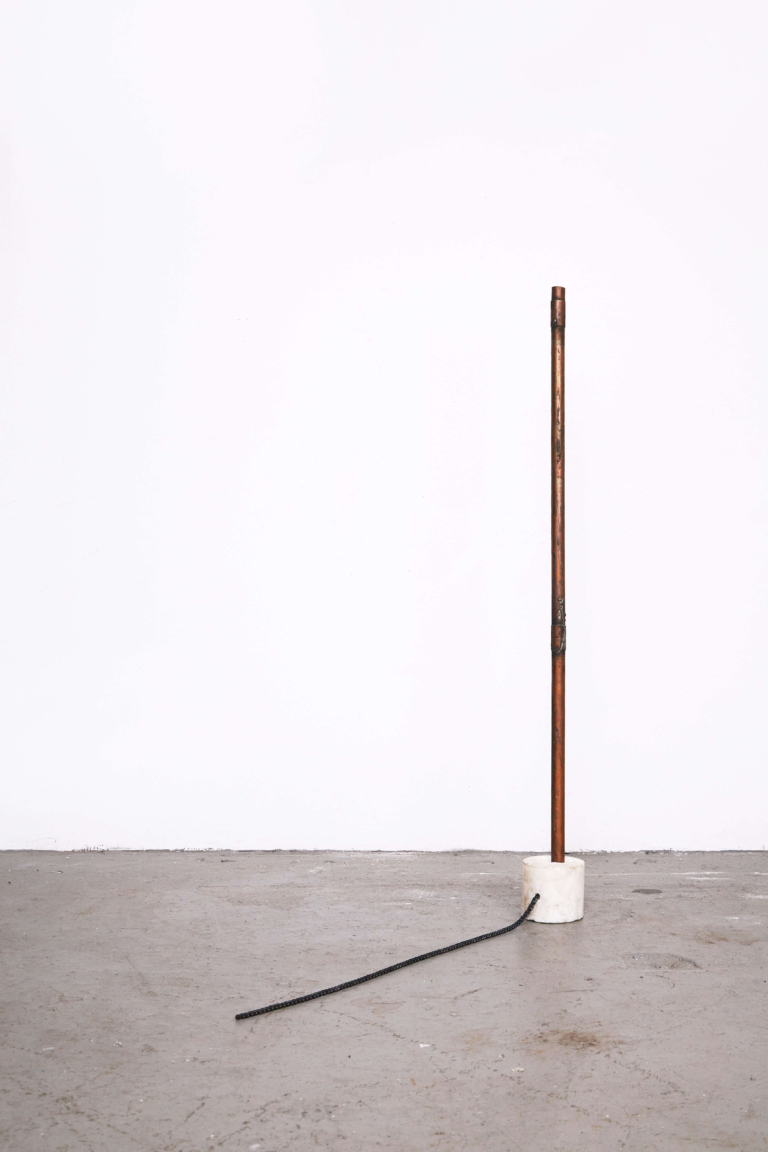 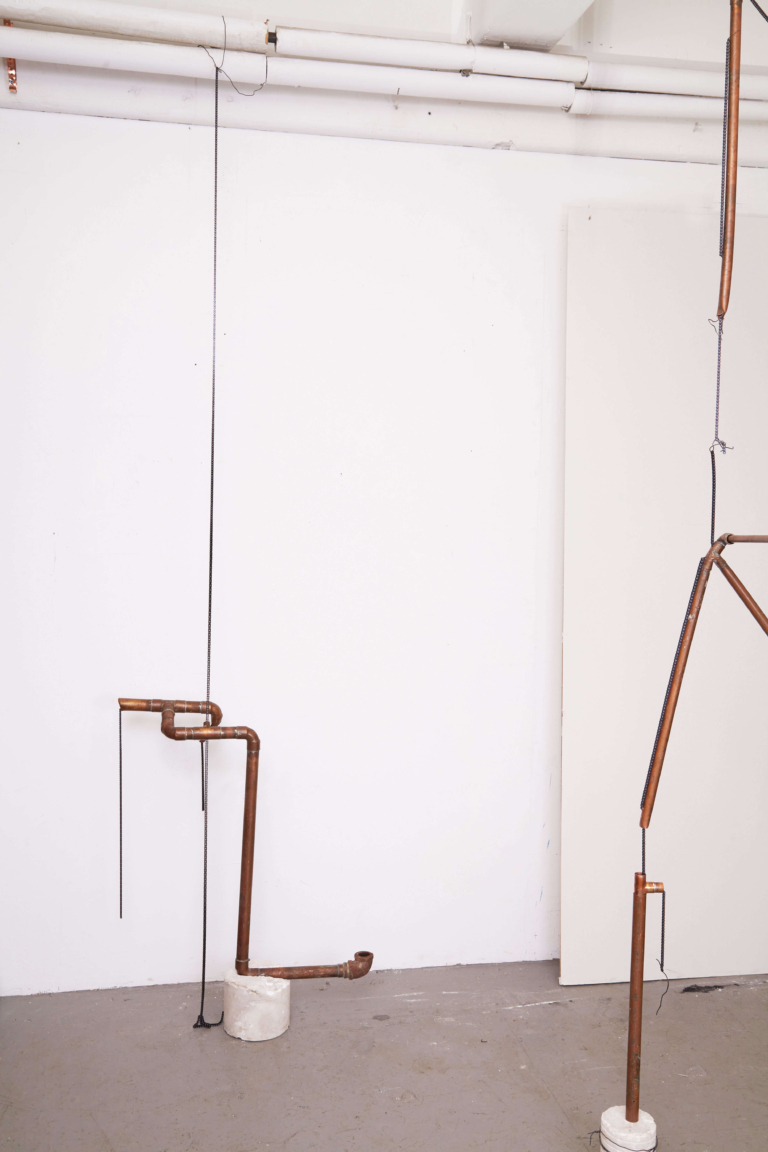 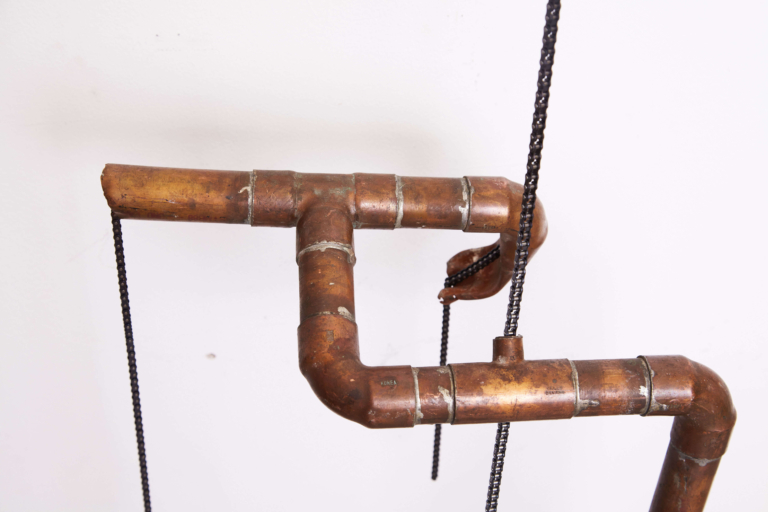 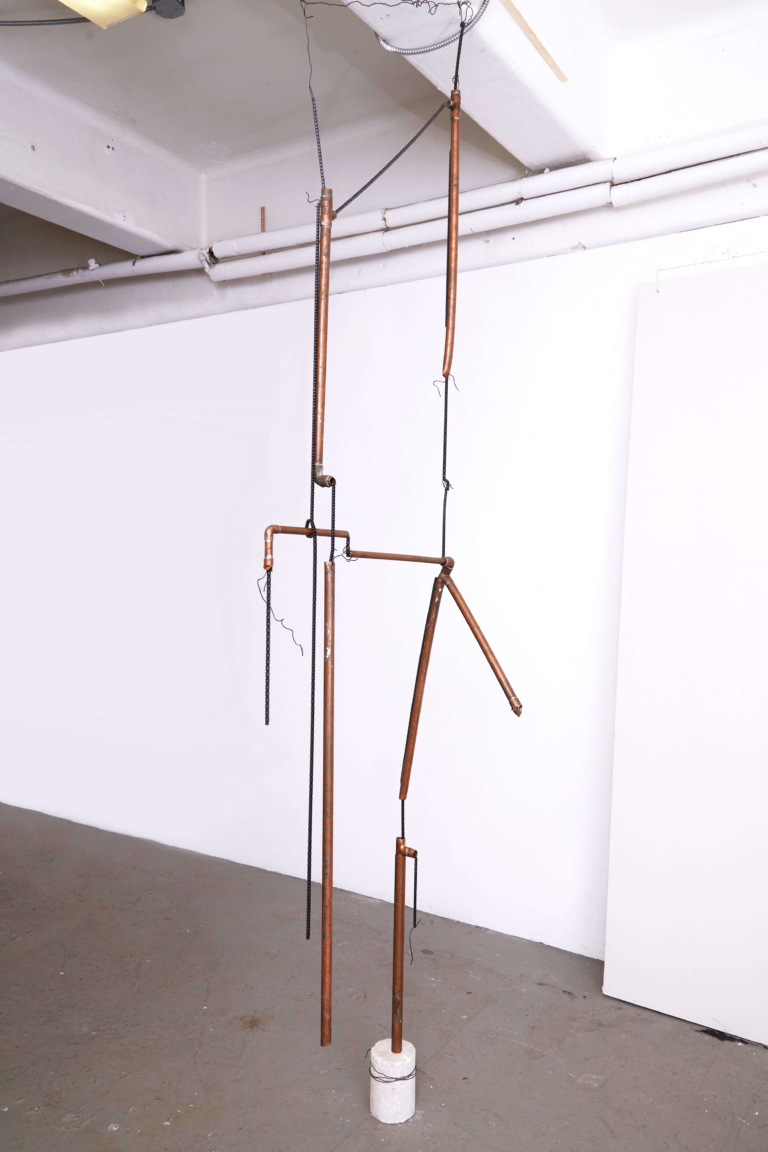 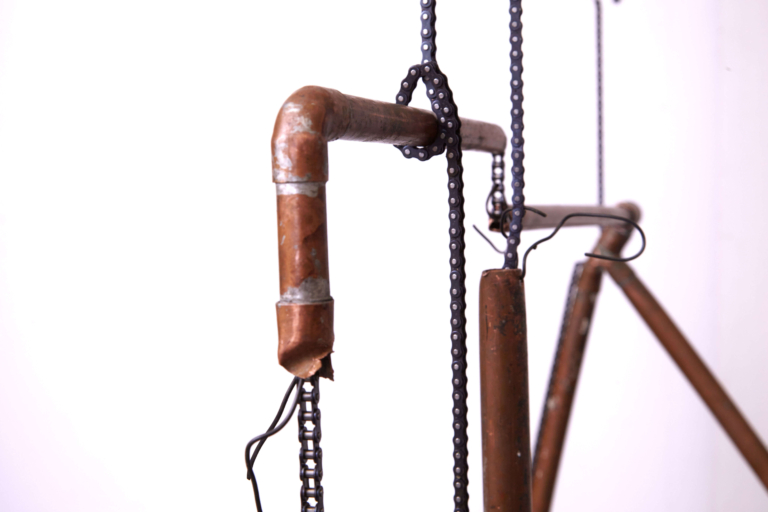 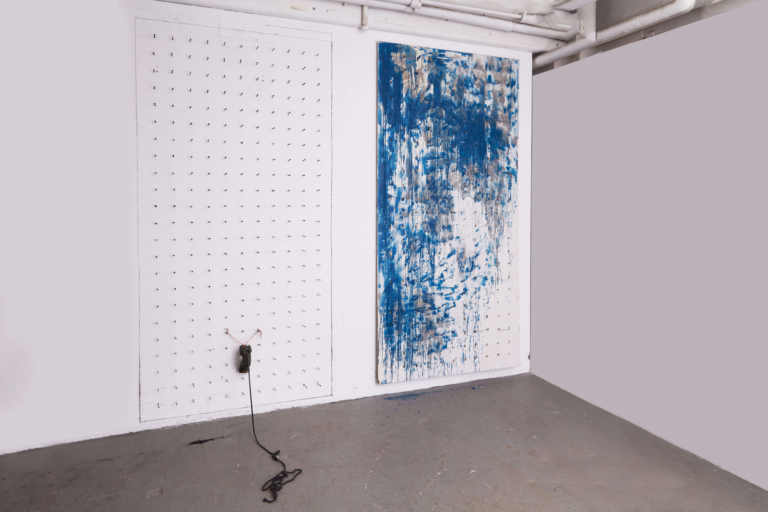 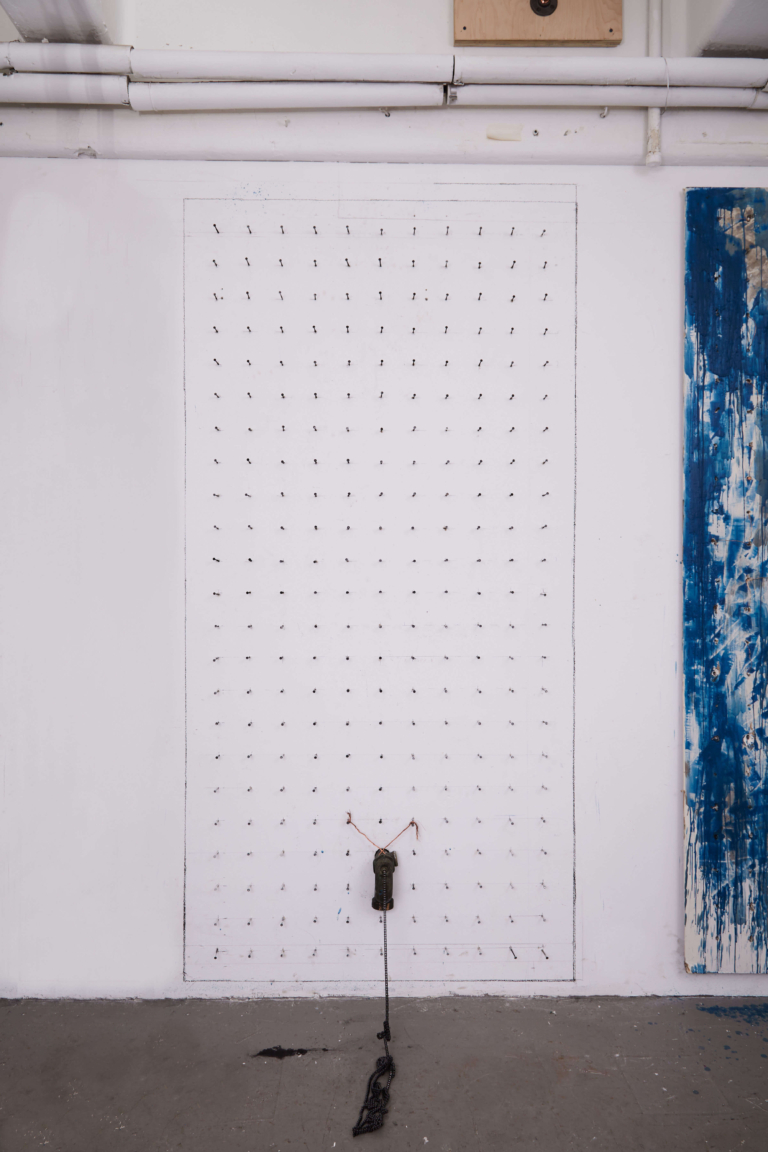 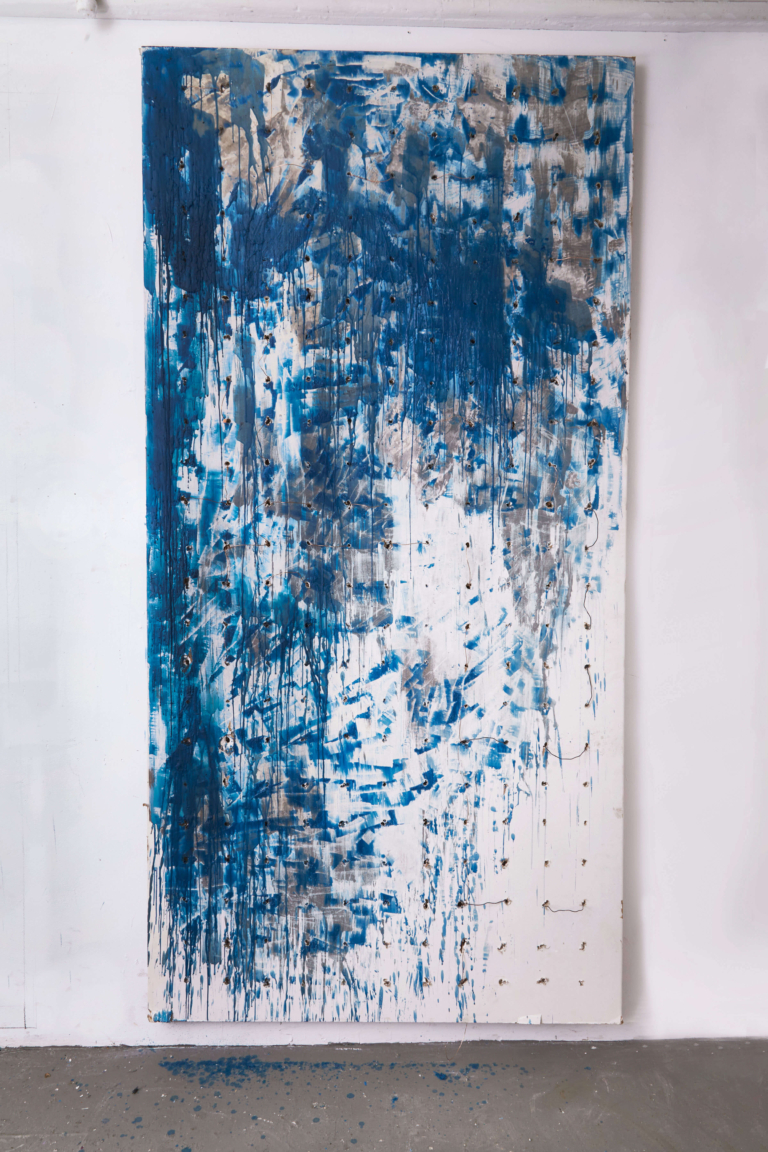 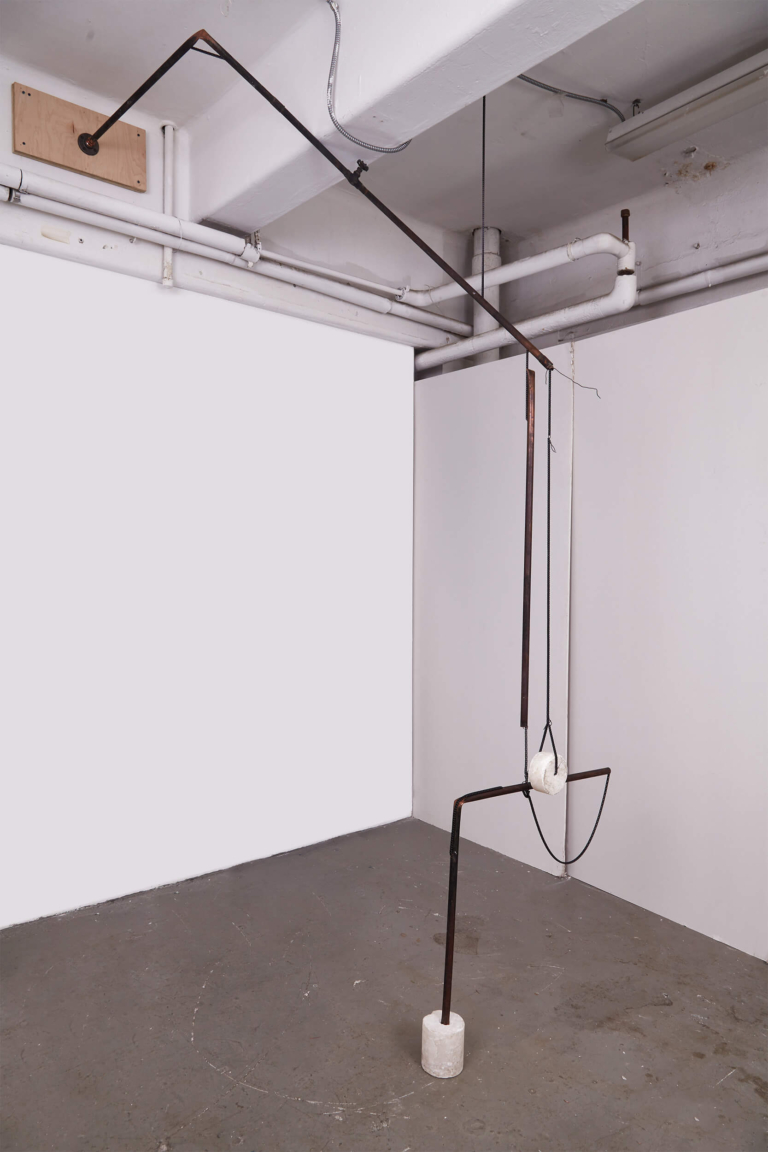 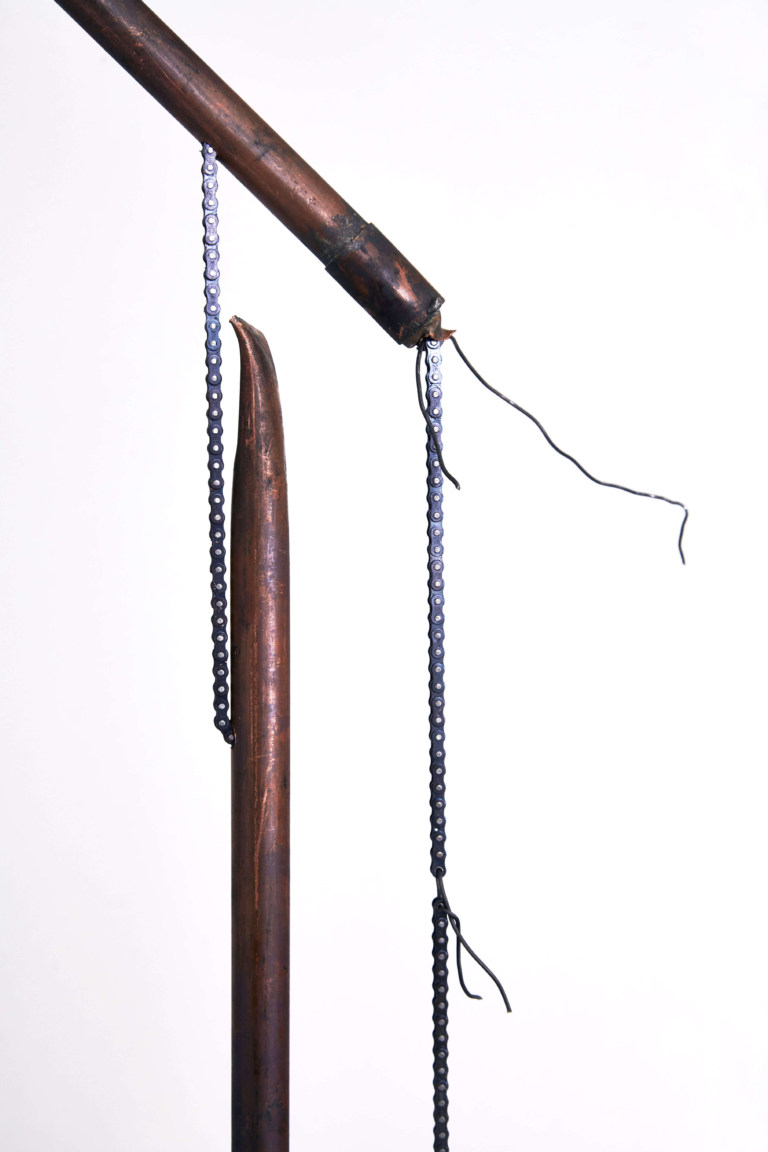 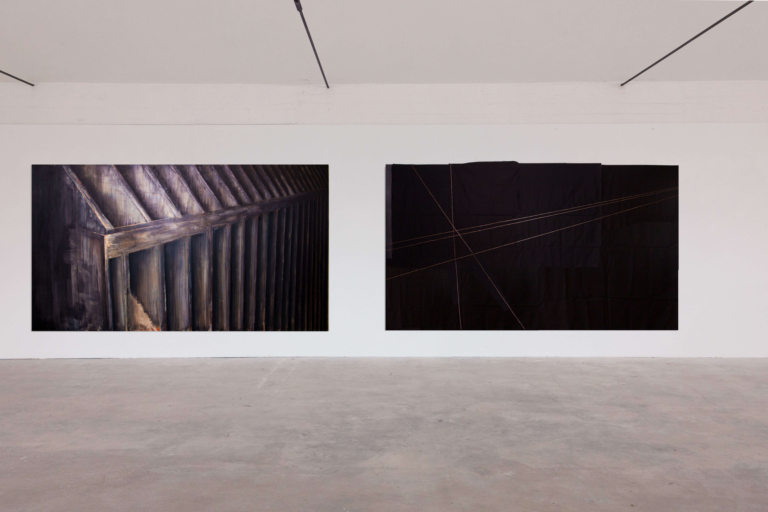 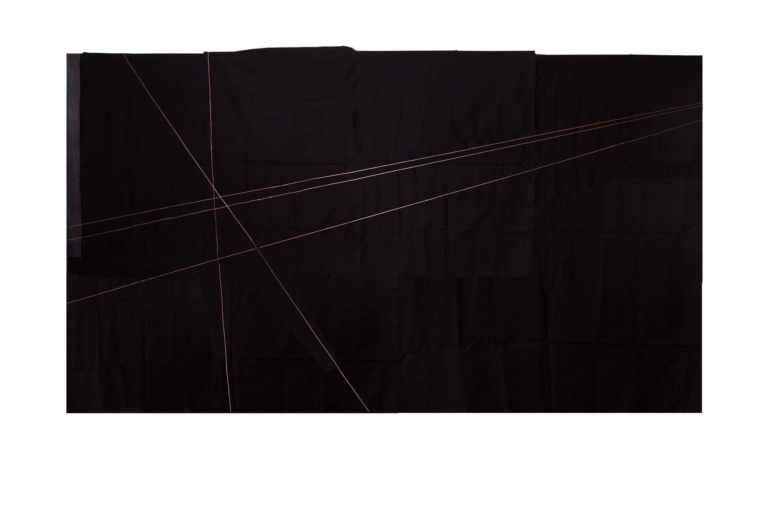 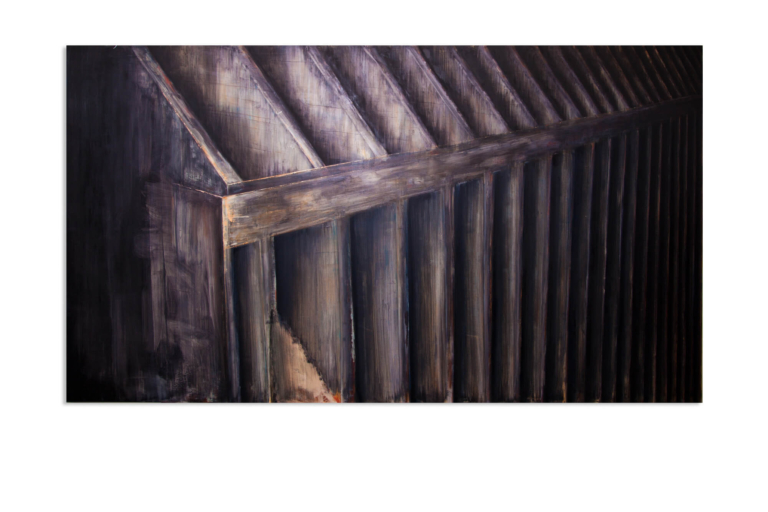 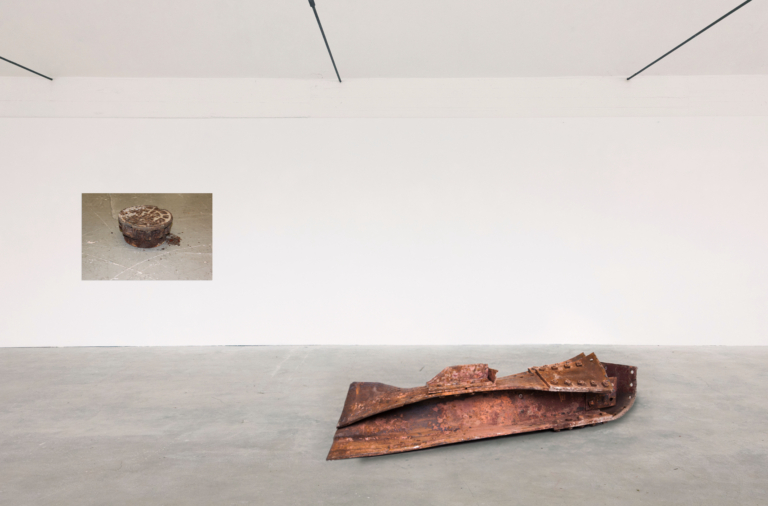 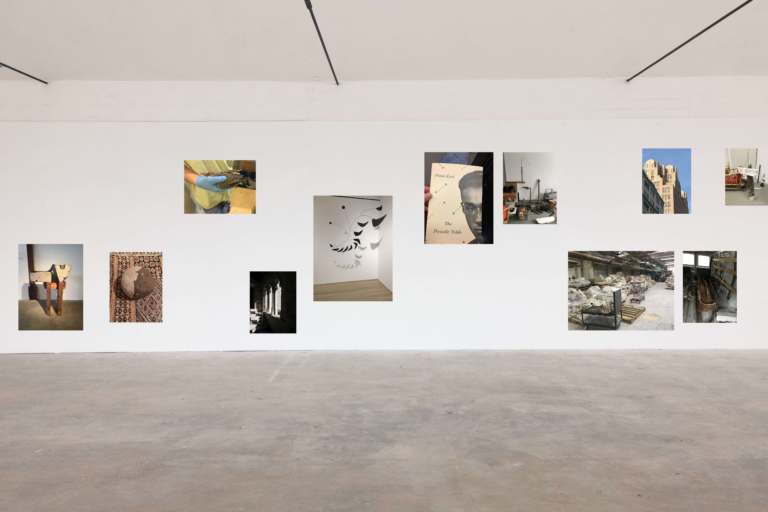