From the 17th century to the middle of the 20th century, thousands of women would flock to northern Italy to work as mondine, weeding the rice paddies of Vercelli, Novara, and Cremona for the forty grueling days of the growing season. Standing in the flooded fields from the break of day until sunset, these migrant workers suffered increasingly poor conditions—paid per day without overtime and working under foremen who stretched the limits of a “day” to nine or ten hour periods.

The experiences of these women are recounted in the Italian folk song “Bella ciao,” which, in the words of historian Diana Garvin, “sings the story of one day and every day in the life of the mondine.” The song charts a mondina’s toil from the sorrowful farewell to her family—evoked repeatedly in the song’s chorus, “O bella ciao, bella ciao, bella ciao, ciao, ciao”—to her arduous labor in the fields under the watchful eye of an overseer who is characterized in terms of sexual violence and authoritarian power (“The overseer with his rod . . . And us bent over at work”). However, as Garvin observes, even as it bemoans the mondina’s separation from family and her long hours of labor, “Bella ciao” reveals the rice fields as a site in which the solitary female body is able to unite with a collective female body. Though the majority of the song is in the first person, the final verse captures the mondina’s realization of her ambitions for a newfound political agency:  “But a day will come when all of us will work in liberty!”

In 1906, the mondine began to organize and put their collectivized power to the test, orchestrating a series of work stoppages. “Bella ciao” became one of several protest anthems fueling their efforts to instate an eight-hour workday. Though their strikes were immediately successful—with ramifications that helped temporarily secure the rights of workers across other manual labor industries including metal-working, baking, and gardening—an increasingly conservative political climate would later see this progress revoked. As fascism came to power in Italy, the government attempted to harness the mondine by placing them in the symbolic role of nurturers in political propaganda. Garvin has written eloquently on the paradoxes built into this portrait of the female working class:

There are many different ways to feed the nation: directly, by cooking and serving food, and indirectly, by producing the raw ingredients. . . . This form of doubled feeding of nation and family revealed several awkward contradictions within the Fascist party. First, the social conservatism of the Italian Fascist party claimed that a woman’s place was in the home, but strongly supported using a predominantly female labor force in the fields for economic reasons. . . . Second, pronatalist rhetoric celebrated the high fertility of the Italian country women but working in the fields temporarily suspended women’s fertility. Not only were they away from men for this period, but the difficult labor conditions suppressed menstruation. . . . What does it mean to be celebrated by the state as a human symbol of ideas that you reject?

As the workers began to see that their struggle was not just with the farmers, but with the government as well, “Bella ciao” expanded in use becoming—between 1943 and 1945—a rallying cry for the anti-fascist resistance.

Part installation and part extended activation, this collection draws upon this history of “Bella ciao” as a paean to those who are believed to be powerless—workers struggling against capitalist greed. At the center of the space, a table is laden with platters of risotto, from which a viewer is invited to serve themselves up a plate. Each serving bowl is handmade—suggesting unique rather than mass production—and contains a different type of risotto, flavored with seasonal vegetables such as radicchio, mushroom, or asparagus. Behind this centerpiece, invoking laborious modes of production, rice “paintings”—in which grains are toasted to different shades— and hand-stitched banners replicate the haunting chorus of the protest song. While opening this group of works to the embodied experience of a viewer, I also intend for this setting of food to be read in a political light, inviting discussion and the potential for collectivity in a gesture to relational aesthetics that harkens back to my graduate studies with Rirkrit Tiravanija. Though far from a rice paddy, this installation troubles the conventional and apolitical understanding of care. 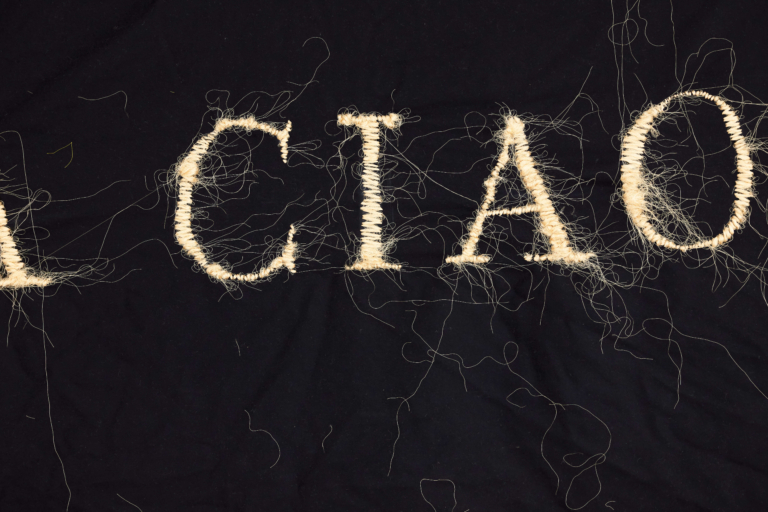 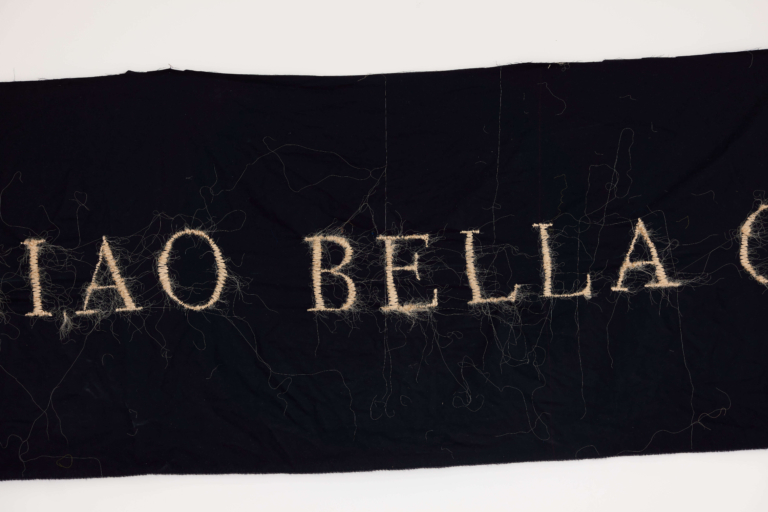 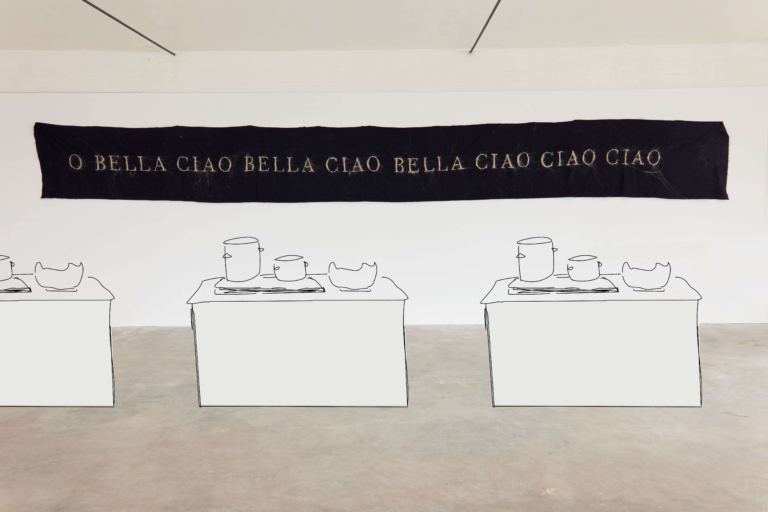 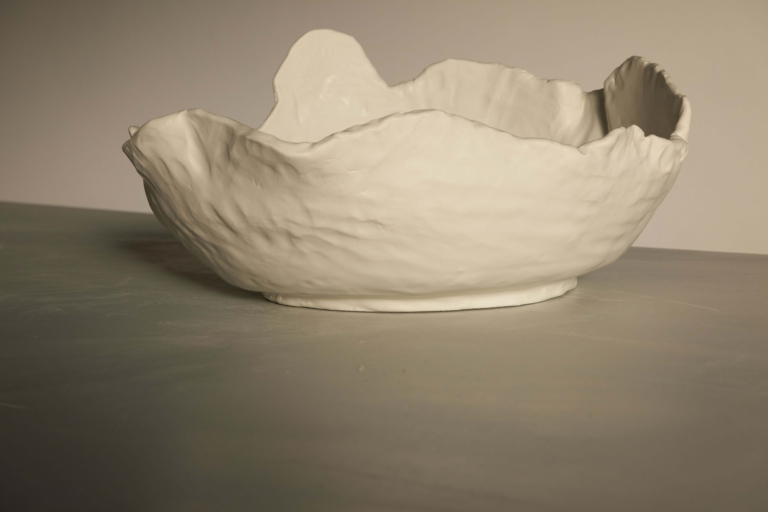 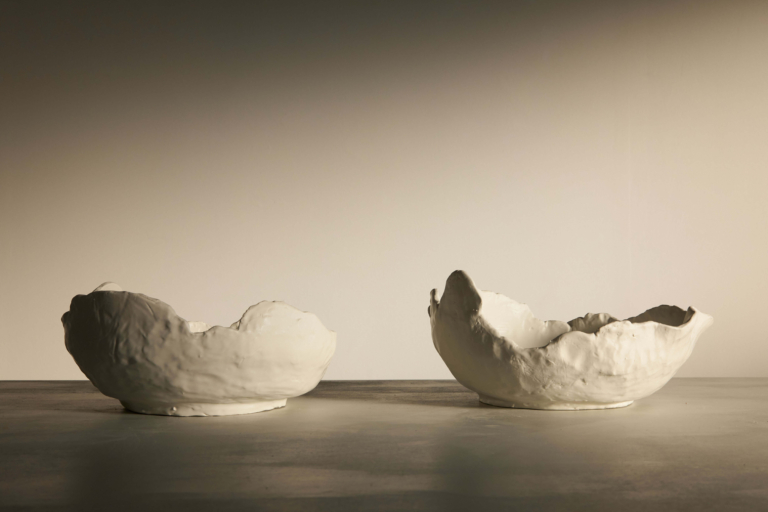 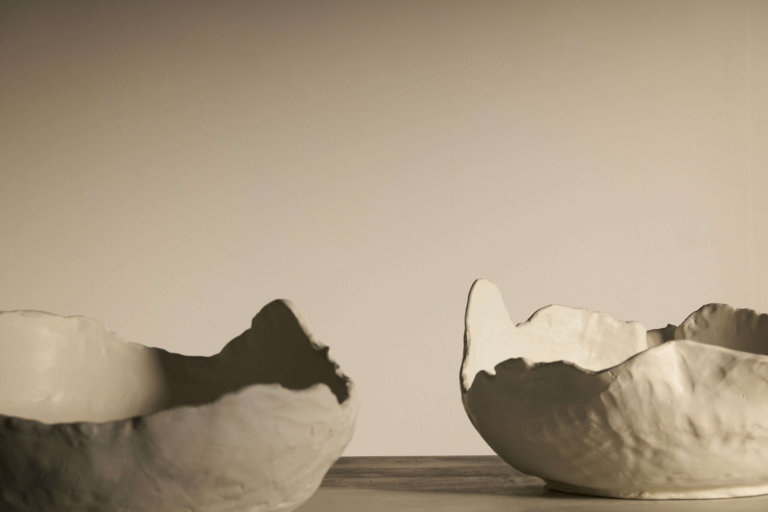 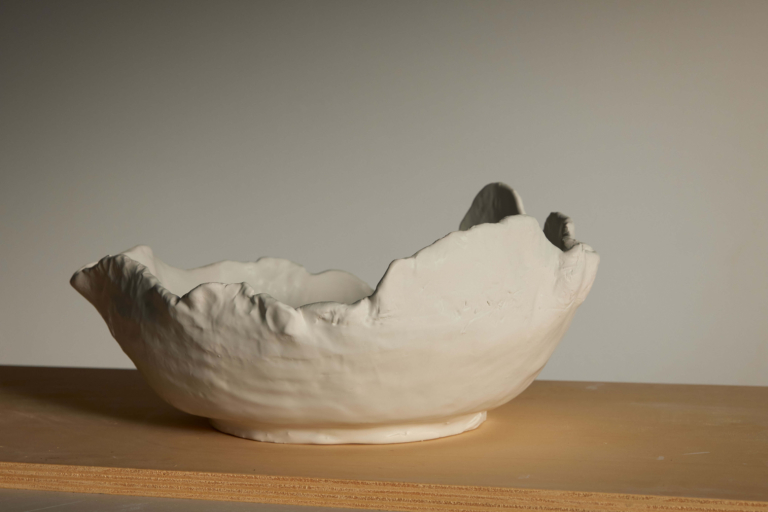 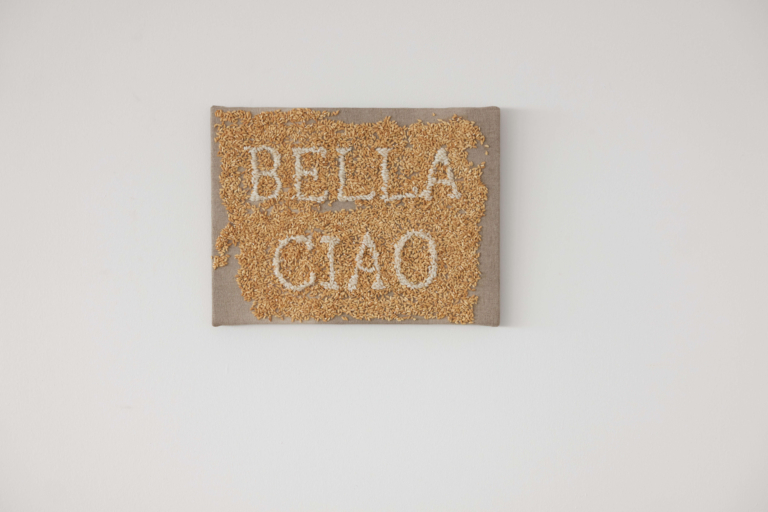 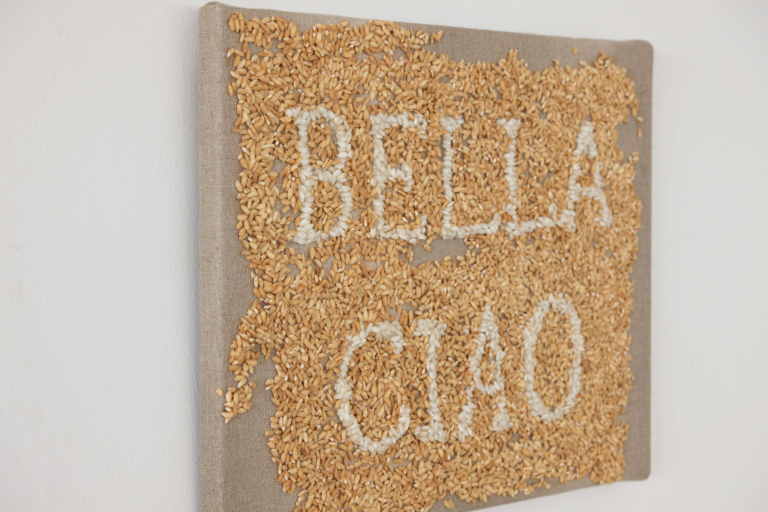 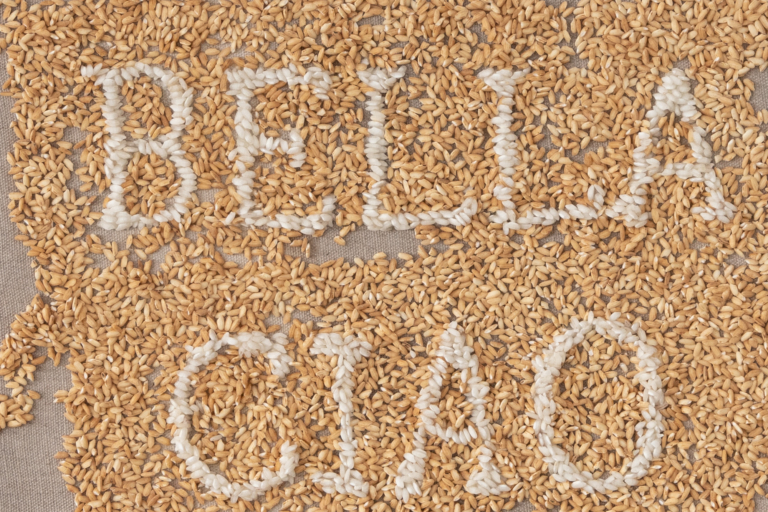 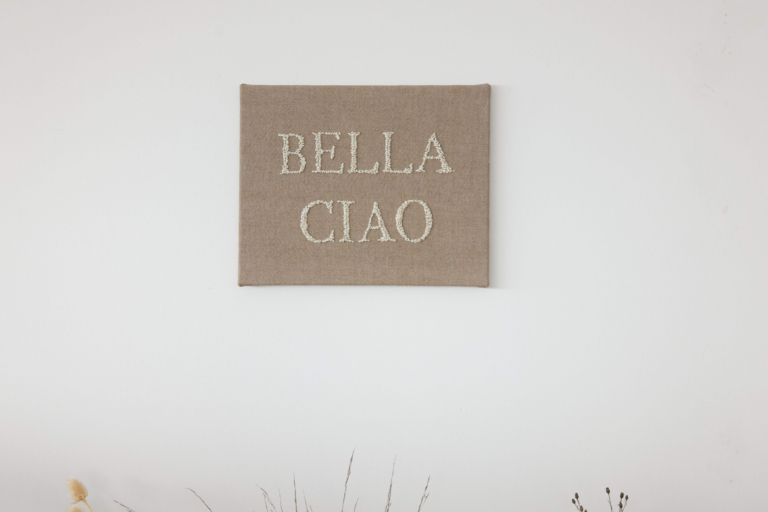 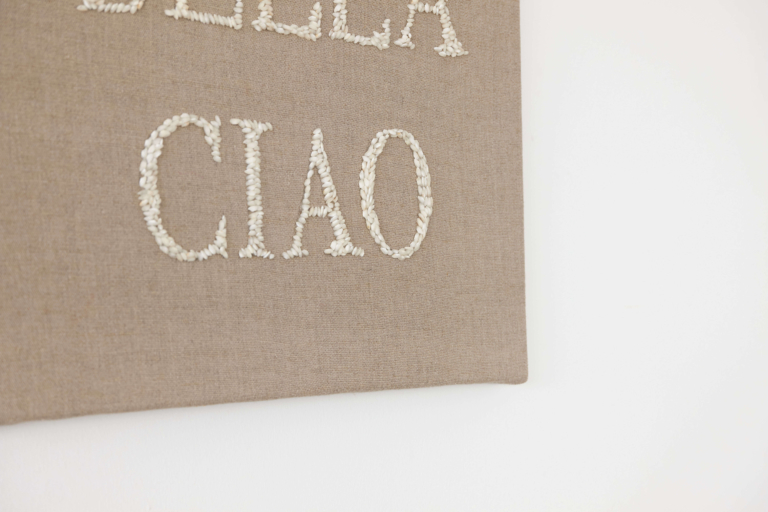 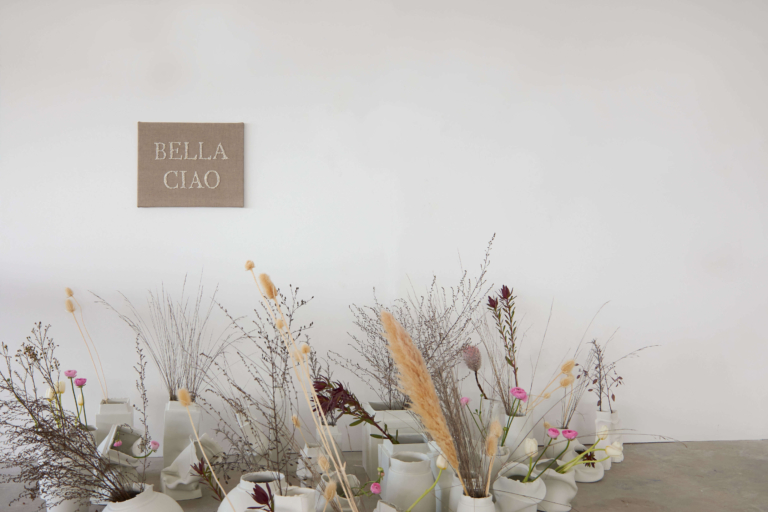