After WWII, my grandfather Onorino trained to be a member of the Alpini—the Italian military branch located in the mountains. He loved the mountains and was proud to join the Alpini, whose insignia is shaped like twin pinnacles, a simplified rendering of the range which gives the branch its name. When I was growing up, my grandfather often spoke about the Tre Cime, a formation of three peaks in the Dolomites. I have always felt a certain uneasiness about the frequent comparison of these three rock faces to military architecture such as battlements or Medieval merlons—types of parapets with openings that allow the defending army to launch weapons at their adversaries below. The characterization strays too close to my grandfather’s own martial ties to those peaks and hints at a militant perception of the world in which a mountain can only be seen for its defensive value. In a literal sense, those mountains divide people. The Dolomites functioned as the border between Italy and Austria-Hungary until 1919, and, to this day, they are still the point of separation between language communities in Italy—German-speaking to the north and Italian to the south.

When I first visited that trifold formation, the sky was white like an empty canvas. At first I was disappointed. I feel a deep connection to Onorino—who was a ceramicist and maker like me—even though he passed away when I was only thirteen. I felt that the ascent into those higher reaches of the world was in some way a path closer to him. I had imagined my visit to one of his favorite places backgrounded by blue skies, like an omen from smiling ancestors. Instead, I found myself surrounded by the forbidding expanse of a barren cloudscape. It was only later, looking at my photographs from the trip, that I saw those desolate skies for what they were—an invitation, following Domenico Modugno’s 1958 song “Volare,” to color the sky blue and invent my own memories in paint. Not all of my additions to the photos are utopic. Through the washes of color, I create a range of feelings oppressive, idyllic, and otherworldly.

The Ladin people of northern Italy have a folktale about the Dolomites—or the “Pale Mountains,” as they call them. In the story, a mountain prince married a beautiful woman from the moon and brought her to live with him amongst the rocky peaks. Over time, looking out over the colorless range, his lunar bride grew homesick. She left to return to her home in the sky. Heartbroken, the prince wandered the lands, where he met a gnome who offered to paint the mountains in vivid color so that the prince’s bride would return to him at last. The lovers were reunited amidst a landscape brought to life by paint.

In Alpini, the painted photographs and the stone skins scattered throughout the space are intended to evoke the possibility of encountering the ethereal in the everyday. These marble fragments are the discarded material from stone quarrying, the irregular surface that is cut away to create smooth slabs for architectural use. Their cragged and pocked surfaces remind me of the moon’s dusty terrain—while these painted skies are like the colored mountains that brought the lunar woman back to the Italian prince. Reinterpreting this mountainous landscape as an alien topography, I wonder if this is also what drew Onorino to the Alps—a love not for the familiar but for the unknown. 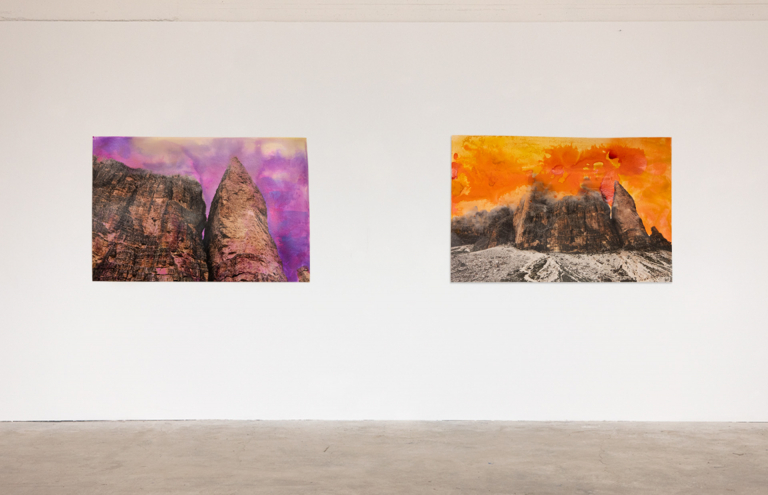 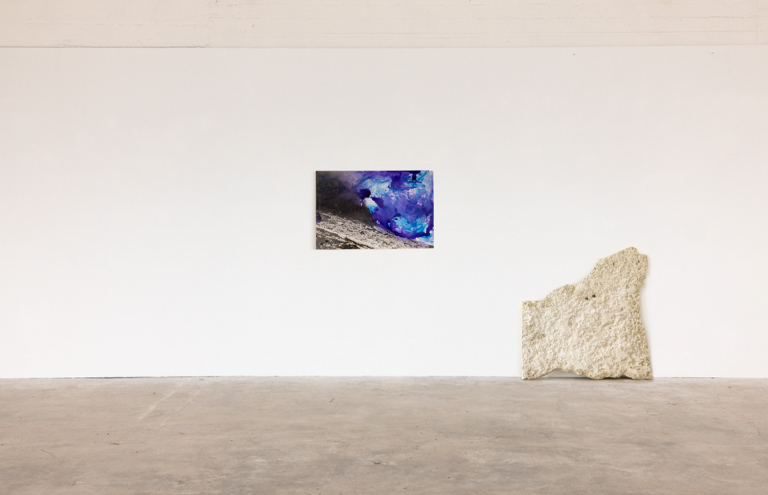 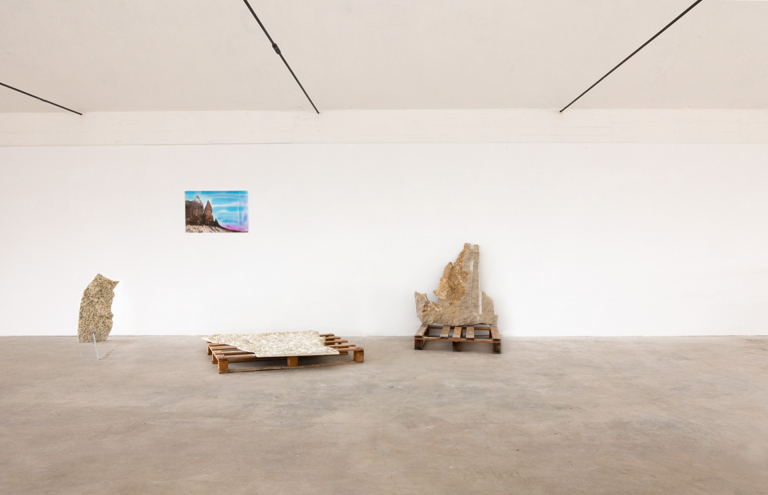 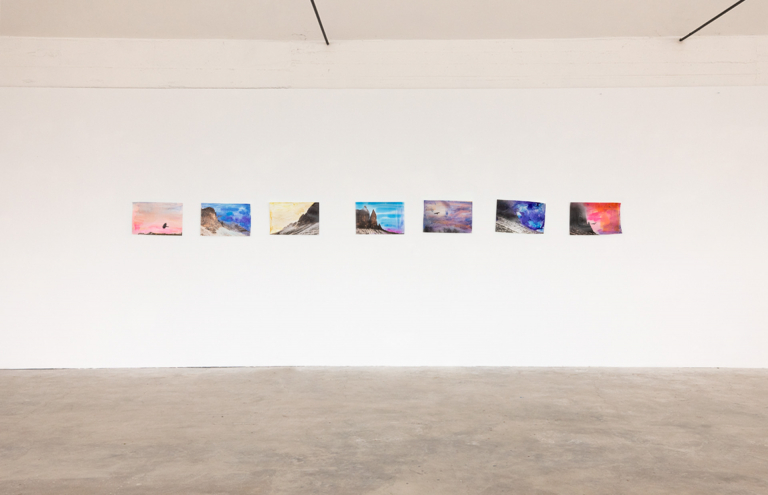 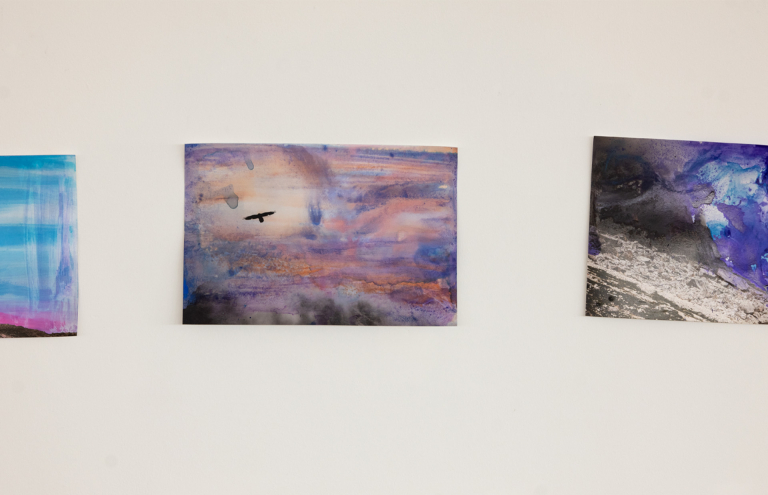 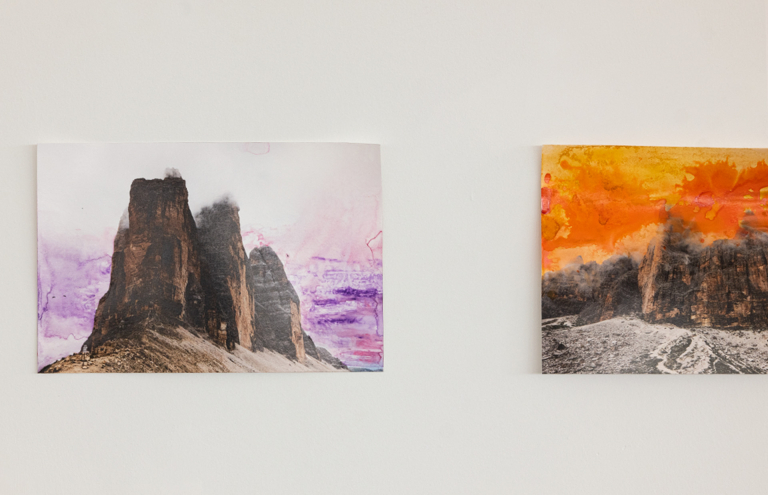 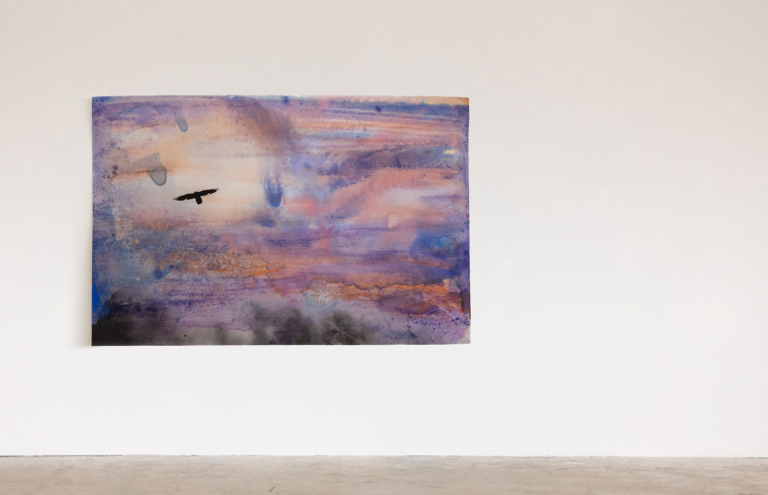 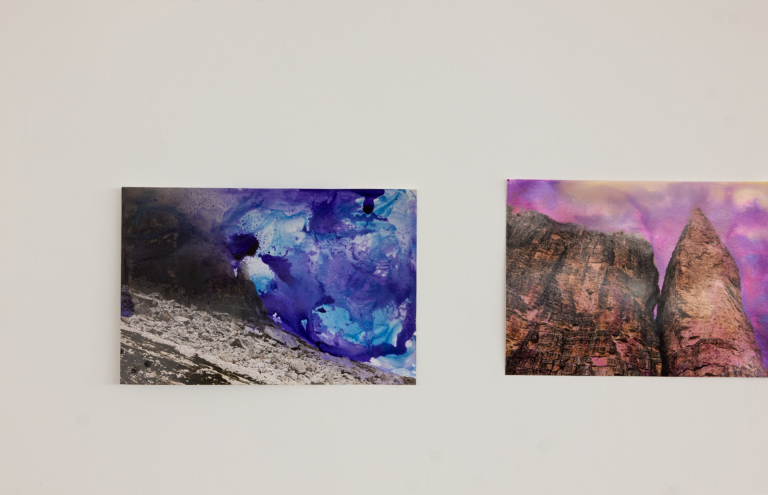 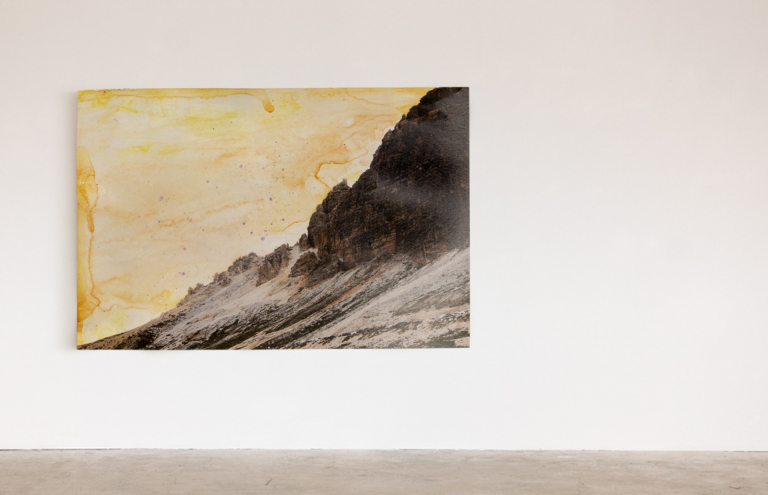 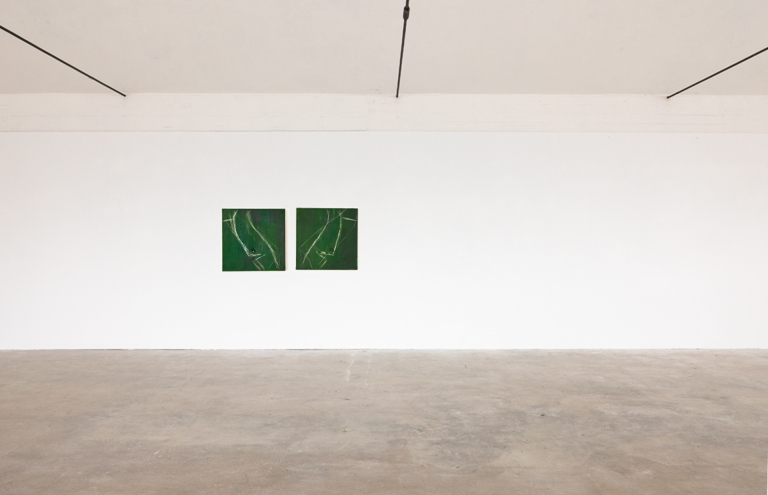 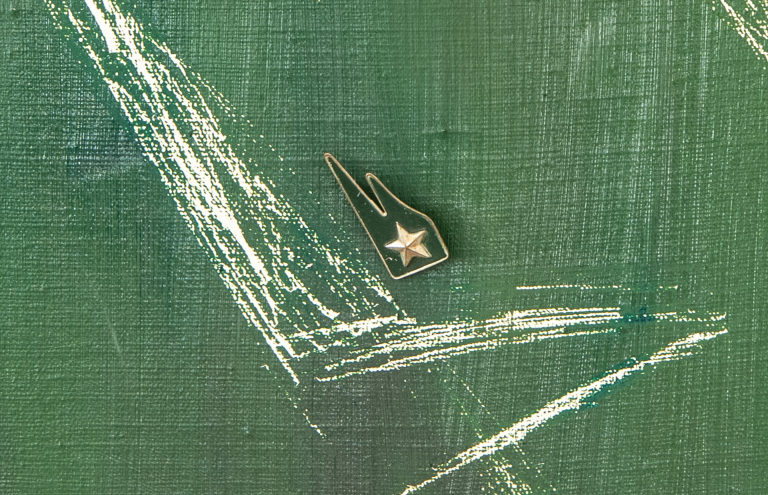 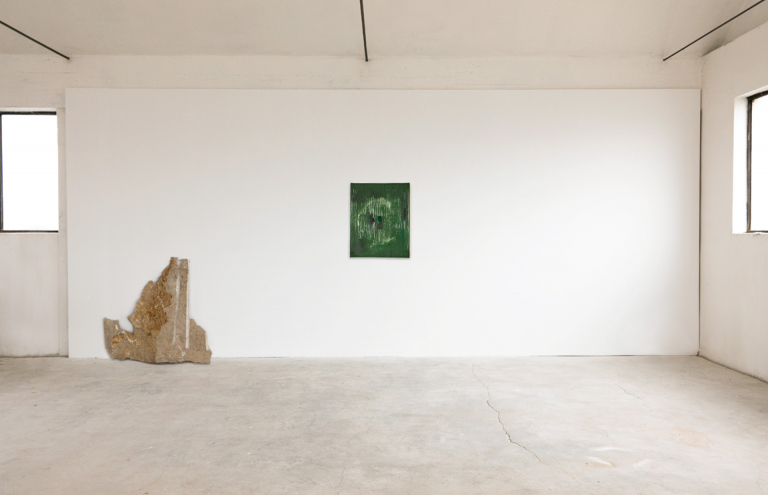 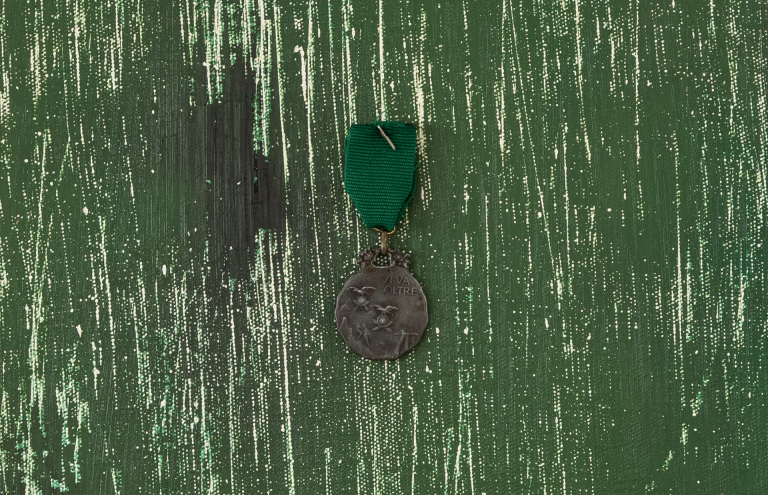 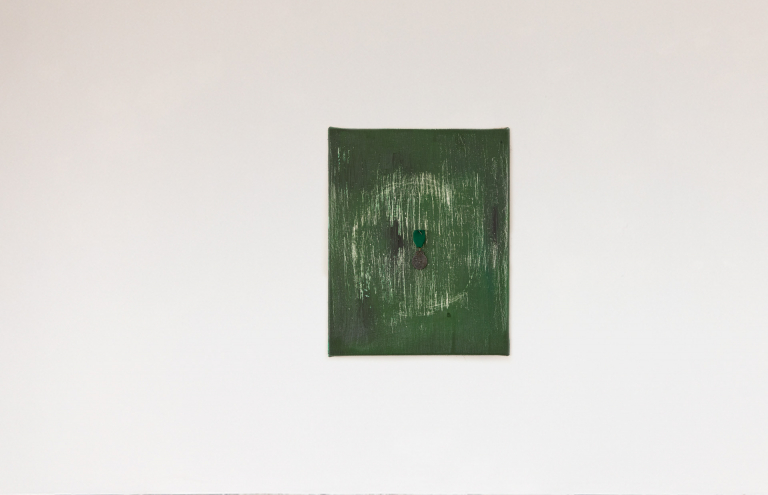 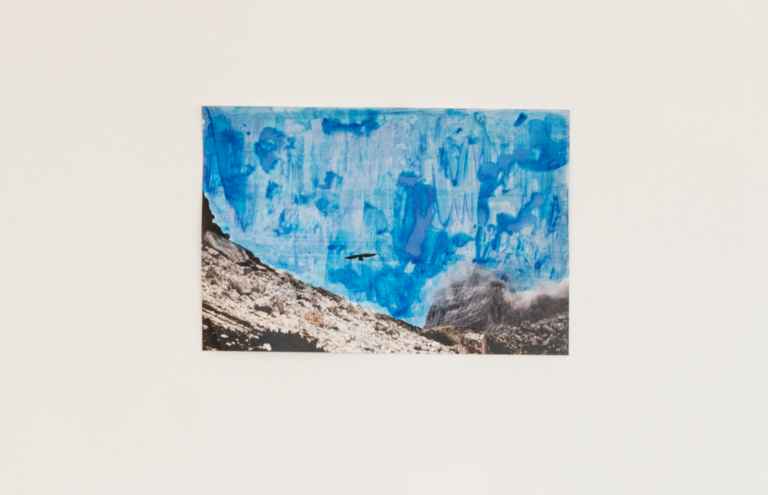 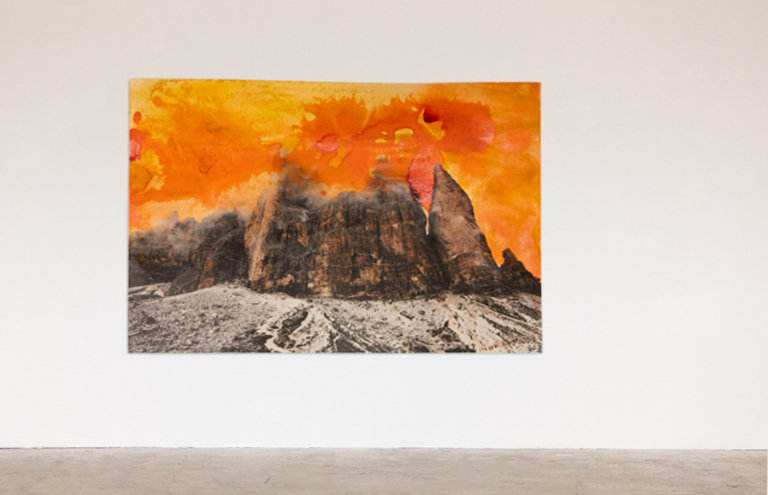 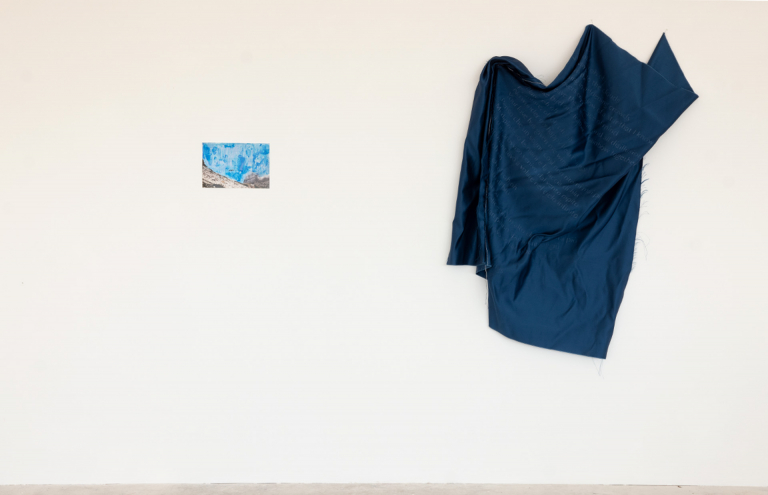 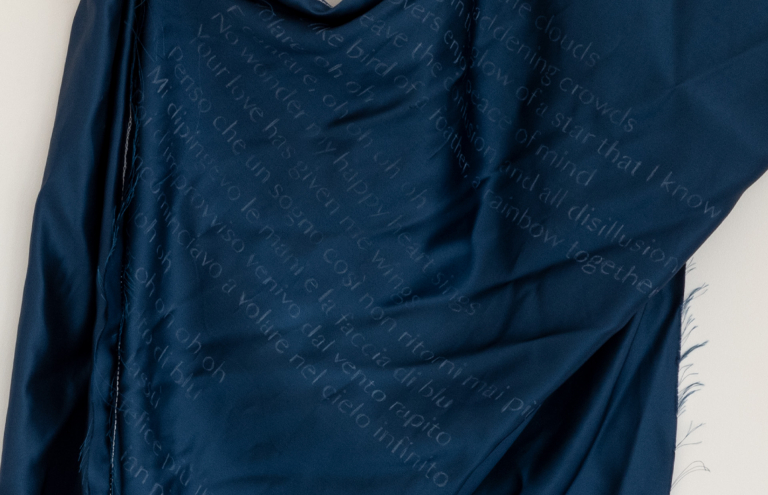